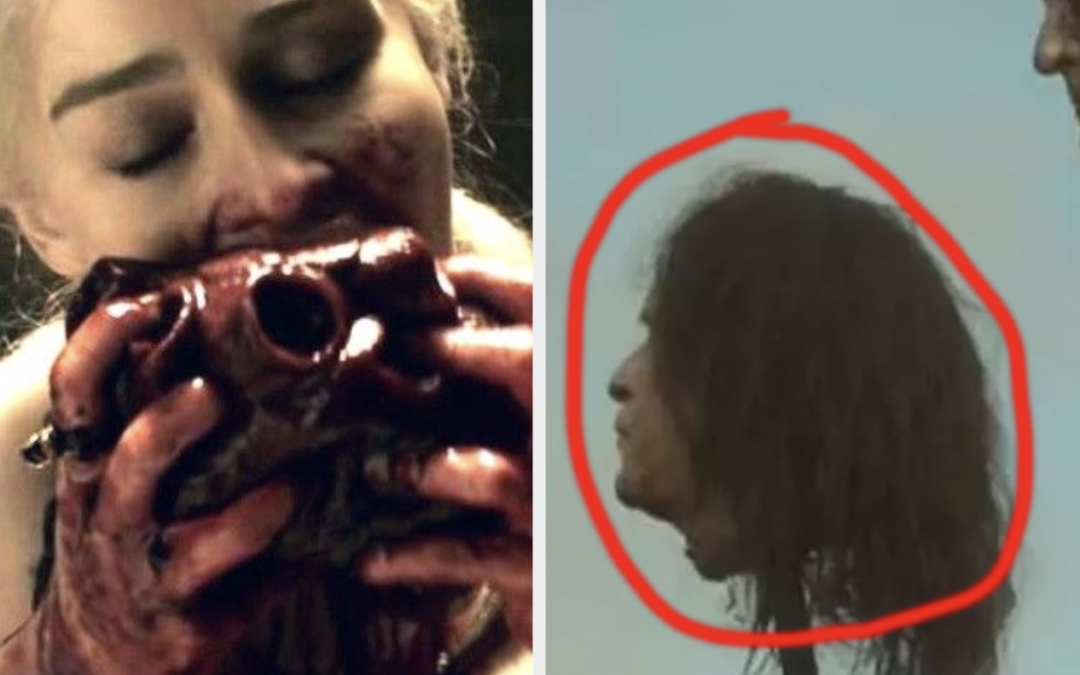 4. You can buy the cloaks the Night’s Watch used in the show at Ikea for $79.

5. The “horse heart” Daenerys ate for Khol Drogo on the show was actually a three-pound mass of a gummy bear–like substance.

6. Peter Dinklage is vegetarian. All the “meat” he eats on the show isn’t real.

8. Jerome Flynn, who plays Bronn, was in ’90s doo-wop duo called Robson and Jerome. They had three No. 1 singles in the U.K.

11. The actor who plays Theon, Alfie Allen, is the brother of Lily Allen. She even wrote this nice little song about him smoking weed all the time:

12. The actor who plays Bran’s 13-year-old companion Jojen Reed was actually 23 years old at the time of filming.

13. He was also the voice of Ferb on the Disney Channel show Phineas and Ferb.

14. And he’s the kid from Love Actually.

15. In 2015, the actor who plays The Mountain, Hafthór Björnsson, broke a millennia old record after he carried a 1,433 pound log five steps.

16. Theon’s sister Yara Greyjoy is named “Asha” in the books.

17. The Dothraki language was created just for the show and contains more than 3,000 words.

18. Part of the language is named after and based on lines from The Office character Dwight Shrute. It’s called the Shrutean Compound.

19. This is what Hodor looks like without a beard:

20. The pilot of the show was originally much different, featuring different actors in key roles. It was apparently a “piece of sh-t.” Look at this HBO promo shot:

24. The events of the Red Wedding and the use of wildfire are inspired by real things! The Scottish “Black Dinner” and Greek fire.

26. Emilia Clarke, who plays Daenerys on the show, does not dye her hair blonde. She wears a wig instead.

27. The actress who plays Sansa, on the other hand, has blonde hair in real life.

28. George R.R. Martin revealed the ending of the book series to the television show’s producers D.B. Weiss and David Benioff in case he does not live to finish the books — but not before making them guess who Jon Snow’s real mom was.

29. A large number of the actors on the show have not read the books, some fearing it will affect their acting if they know what happens to their character.

30. The actor who plays Maester Aemon of the Night’s Watch is legally blind in real life, like the character he portrays in the television show.

31. Robert Baratheon previously bared it all in The Full Monty.

32. He also played the dad on the show Still Standing.

33. After the first episode of the show aired, the actor who plays Joffrey, Jack Gleeson, received a letter from George R.R. Martin that read, “Congratulations, everyone hates you!” He’s since retired from acting.

34. After being covered in blood while filming a particularly gory scene, Emilia Clark, who plays Daenerys, got stuck on a toilet seat.

35. The show is credited with inventing the phrase “sexposition,” which basically means revealing important plot points of a story while tons of gratuitous sex is happening.

36. This is what The Hound looks like without a beard and scarring:

37. He also starred in this particularly popular commercial:

38. The Wall is based on Hadrian’s Wall of Roman Britain.

39. In season three of the show, the sound designers used (among the noises of other animals) the sound of two tortoises having sex to make the roars the dragons made.

40. The severed head of George W. Bush appears in a couple of scenes in the first season of the show.

41. The dire wolves on the first season of the show were played by Northern Inuit dogs.

43. The guy who plays Grand Maester Pycelle, Julian Glover, played these two familiar faces in Star Wars: The Empire Strikes Back and Indiana Jones and the Last Crusade:

45. Nikolaj Coster-Waldau, Jamie Lannister, got his start in the movie Black Hawk Down.

46. The co-creators of the HBO show, David Benioff and D. B. Weiss, wrote an episode in the ninth season episode of It’s Always Sunny In Philadelphia called “Flowers For Charlie.”

47. Before his audition for Jon Snow, Kit Harrington got into a fight at McDonald’s and ended up auditioning with a big ol’ shiner.

48. Because of an obscure rule barring her from sitting on any “foreign throne”, Queen Elizabeth was forbidden from sitting on the show’s Iron Throne when she visited the set.

49. This is what Margaery Tyrell’s grandmother, The Queen of Thorns, looked like in the ’60s:

50. Finally, this is what Hodor and Arya look like DJing: