Michael Jackson Fans Are Tenacious. ‘Leaving Neverland’ Has Them Poised for Battle. – The New York Times 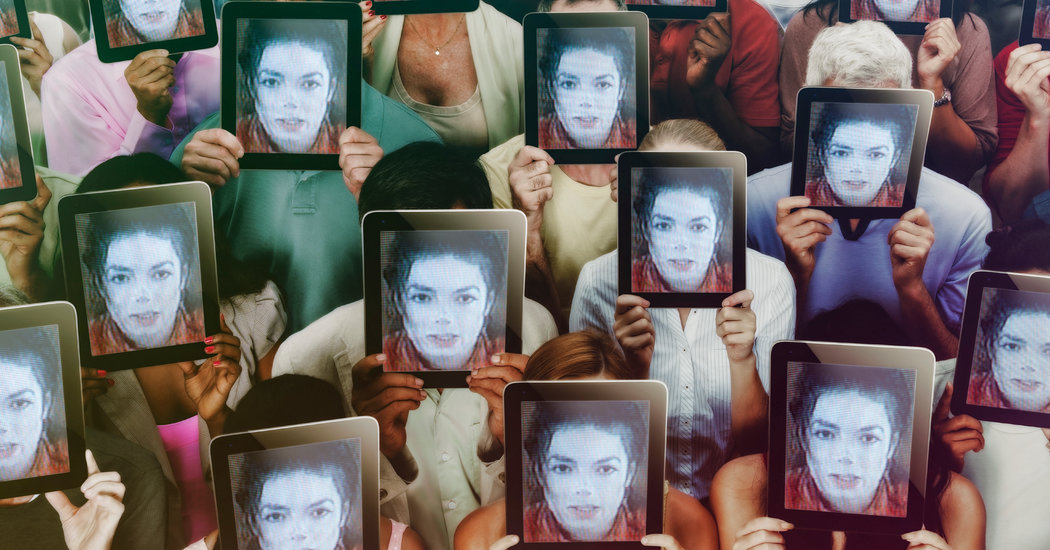 Beyoncé has the BeyHive and Nicki Minaj the Barbz, fan groups who swarm online against anyone who disparages their idols. The Deadheads may have provided a blueprint, though these days they are more likely to bicker among themselves.

But in the age of the 21st-century superfan, perhaps no group is more emphatic, organized and passionate online than the devotees of Michael Jackson, the King of Pop whose legacy includes decades of innuendo and court cases regarding what he did or did not do with young boys.

Across blogs, message boards, podcasts, YouTube videos and especially social media feeds, where a Jackson avatar broadcasts one’s allegiance, they circulate exhaustive evidence that they view as exonerating for the singer, while shouting down news outlets they consider inaccurate and biased.

Brewing for weeks, their fight kicked into a new gear on Sunday, with the airing of the first half of “Leaving Neverland,” an HBO documentary about two men who say Jackson repeatedly sexually abused them as children.

Ads for MJInnocent.com on buses in London and digital billboards in the United States are proclaiming: “Facts Don’t Lie. People Do.” Under the Twitter hashtag #MJFam, dozens of fan accounts have encouraged counterprogramming to the film, instructing followers to stream Jackson’s music instead of watching. And on Sunday night, fans deluged the #LeavingNeverland hashtag with thousands of tweets, dominating discussion of what they called a “mockumentary” and attacking the two men at its center.

Dan Reed, the director of “Leaving Neverland,” which concludes on Monday, said that his company had received “dozens and dozens and dozens and dozens” of emails from Jackson fans — “a deluge of hatred” beginning within 20 minutes of the film’s announcement in January. He and the two men in the film, Wade Robson and James Safechuck, said that some fans had taken it even further, with threats of violence.

“One can only compare them to religious fanatics, really,” Reed said. “They’re the Islamic State of fandom.”

Jackson’s supporters don’t see it that way. Since accusations in 1993 by a boy and his family ended with a $23 million settlement, the fandom’s party line has been that any allegations amounted to extortion plots by hangers-on hellbent on tarnishing Jackson and exploiting his naïveté.

A specific strain of the Jackson faithful has pored over the granular details of his life and cases, including the 2005 trial in which he was acquitted of charges he molested another boy, in hopes of proving his innocence. Those fans — including the young and old, from Queensland, Australia to Moscow to Huntsville, Ala. — view “Leaving Neverland” as a manipulative, one-sided hit piece that rehashes old allegations from inconsistent sources.

The film has also turned what was for years a niche obsession for many Jackson fans into a mainstream battle.

“If you’ve been a fan for a long time, you’ve seen this over and over again,” said Casey Rain, 30, a musician and YouTuber living in Birmingham, England. He called “Leaving Neverland” a “sick attempt at hijacking the Me-Too moment.”

Many Jackson fans resort to indiscriminate, anonymous hate mail targeting journalists and Jackson’s accusers. Others like Rain show their devotion in deeper ways, painstakingly constructing videos and epic polemics that weave together court papers and obscure interviews, then sharing and resharing their work across multiple platforms.

“There’s nothing about Michael that the fan community doesn’t know,” said Rain, whose blog post about “Leaving Neverland” became a go-to text even before the documentary aired. “I really don’t think that we lack objectivity on him.” (Rain and others who had not yet seen the film said their information came from a few Jackson fans who attended the Sundance premiere and took “very, very detailed notes.”)

Susanne Baur and Elena Ovchinnikova, who co-author the blog Vindicating Michael, said they prefer not to be called Jackson fans at all because fan “has a too negative connotation of adoration and worship,” Baur, 60, wrote in an email from southern Germany.

Instead they identify as researchers and activists who view Jackson as a civil rights case. In a post about “Leaving Neverland” that totaled more than 10,000 words, Ovchinnikova, who is 65 and based in Moscow, parsed the changing stories of the two men in the film and concluded that they are liars.

“The reaction of the M.J. community is absolutely adequate,” Ovchinnikova said via email. “It is the reaction of knowledgeable people who have to talk to ignoramuses.”

Linda-Raven Woods, a 56-year-old from Huntsville, called herself a former “die-hard metalhead” whose lingering questions about Jackson’s guilt after his death had led her to fansites.

Wowed by the depth of their research, Woods realized, “This is why they defend him so passionately,” she said. She is now an administrator of @MJJLegion, a Twitter account with more than 80,000 followers that has been busy coaching fans on how to counteract the documentary.

Some of these supporters acknowledge that the elaborate lengths of their writing and reasoning invites comparisons to conspiracy theorists, or as Damien Shields put it, a “ranting mob.”

But Shields, the author of a book on Jackson’s music and a fan for more than two decades, said it is all a matter of perspective: “We also view the media as a ranting mob in some circumstances.”

He said that the fans’ support comes from a place of love and passion, comparing those on social media to the Britney Spears fan Chris Crocker, who cried “Leave Britney alone!” in an infamous viral video.

In the cases of Robson and Safechuck, fans note that both had previously testified that Jackson never abused them, and that they later unsuccessfully sued the singer’s estate. (Their claims are now under appeal.)

Both men said that it took them years to accept that they were abused and that they had felt pressured to testify on Jackson’s behalf. Reed, the director, said the film was, by design, “about how Wade changed his mind and confronted the truth about what happened to him” — a “radical reassessment of what it all meant.”

In an interview, Robson said that he understood the way many still cling to Jackson’s “very particular angelic persona.” He added, “That was so palatable for so many people, including myself.”

Robson and Safechuck said they, too, had faced an onslaught since coming forward, with Robson describing “thousands of extremely volatile and nasty emails or social media comments.” They cited the intensity of Jackson’s defenders a possible reason more people don’t come forward. “It’s an extremely terrifying thing to do,” Robson said.

As the film’s television premiere approached, some fans struggled with keeping up the fight for Jackson’s reputation as they also girded themselves for the increased scrutiny.

While some said they would boycott the film because it does not include outside context or interviews with defenders, others said they would stomach it for the good of the community.

“I need to know what we’re up against,” said Woods of @MJJLegion.

Shields said he couldn’t help but feel a sense of dread about the coming months: “This literally could be the end of Michael Jackson if — big if — someone in a position of repute doesn’t decide to tell the other side of the story,” he said.

In the meantime, it was “almost like therapy” for fans to do their part to push back on the claims. “Even if their part doesn’t actually make any impact,” he said, “at least they tried their best.”