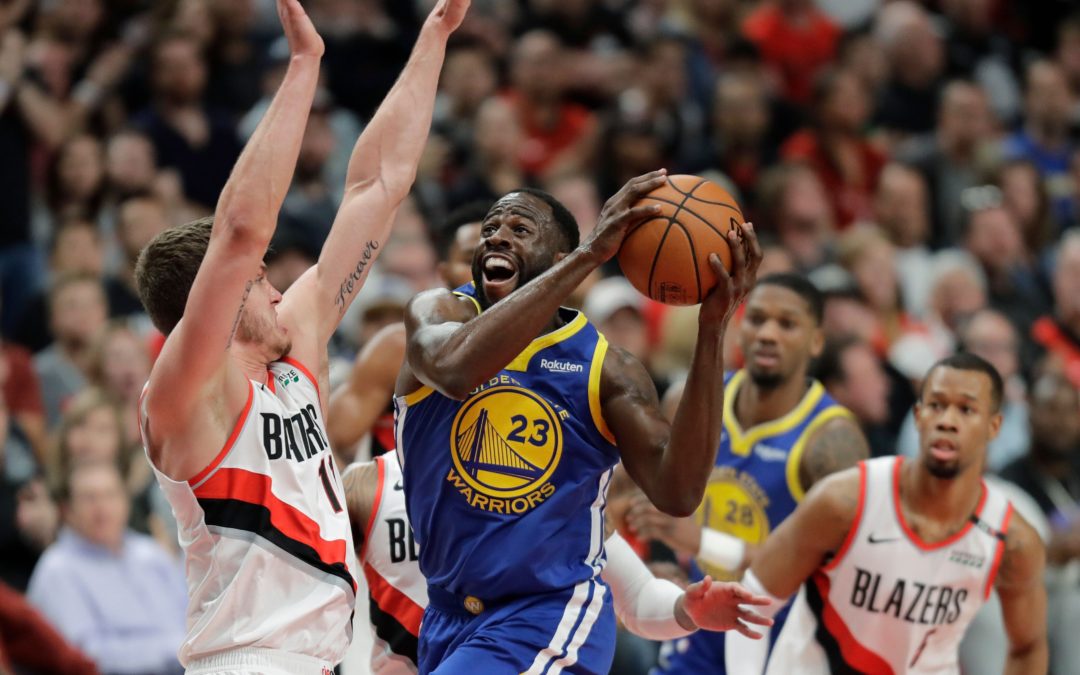 Back on their home floor, the Portland Trail Blazers had a chance to pick up their first win in the Western Conference finals on Saturday night.

Yet after building an early 18-point lead, the Trail Blazers fell just short.

The Golden State Warriors rallied back to beat Portland 110-99 at the Moda Center, moving them just a single game away from a fifth-straight trip to the NBA Finals.

The Blazers came out hot, quickly jumping to a 10-point lead in the opening minutes behind a 15-5 run to start the game. The Warriors cut Portland’s lead to just two points by the end of the quarter, however, thanks to nine points from both Stephen Curry and Klay Thompson.

A 10-0 run early in the second, while holding the Warriors to just five points in nearly the first five minutes of the period, pushed Portland back into control with a 15-point lead. While Draymond Green drilled a floater at the buzzer just before halftime, the Warriors still went into the locker room down 13. Blazers center Meyers Leonard, who made just his third start of the season on Saturday, led Portland with 13 points in the first half while shooting 5-of-7 from the field.

Golden State came finally alive in the third quarter, mounting a massive 22-6 run late to pick up its first lead of the game. While their offense was impressive, the Warriors’ defense was even more so, limiting Portland to just 13 points in the third quarter to grab a three-point lead.

Curry led the Warriors with 36 points, having shot 6-of-16 from the three-point line. Thompson added with 19 points, and Green finished with a triple-double with 20 points, 13 rebounds and 12 assists — which marked his seventh career postseason triple-double.

“I don’t even know what to say about Draymond,” Warriors coach Steve Kerr said. “He was like a wrecking ball out there. He was just destroying everything in his path. The pace that he was generating was incredible and it just seemed like he never got tired … It’s one of the best games I’ve ever seen Draymond play.”

Game 4 of the series is scheduled for Monday night in Portland, where the Warriors will have a chance to clinch a Finals berth and guarantee nine full days of rest before that series starts.

“We won’t talk about anything other than Game 4,” Kerr said. “What’s after that doesn’t matter. Maybe Game 5. What’s after that might be Game 6. So we just focus on the next game ahead of us.”