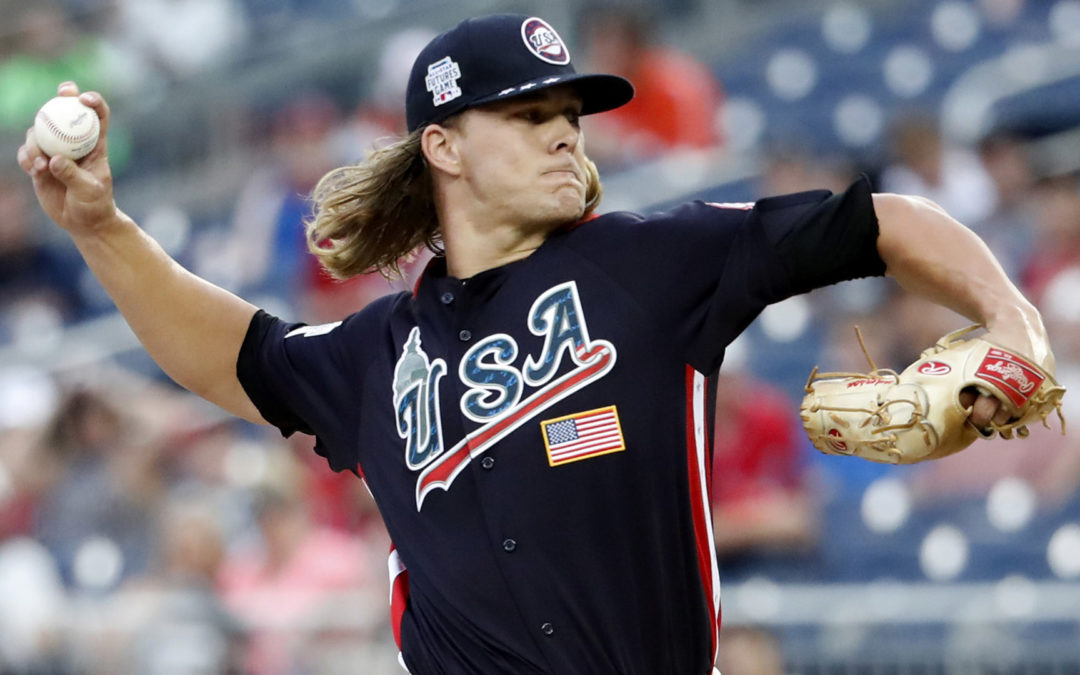 SAN FRANCISCO — All eyes were on Giants top pitching prospect Shaun Anderson on Wednesday afternoon, but you’ll forgive some of his new teammates if they didn’t pay full attention when Anderson dug into the box in the second inning.

Even Aramis Garcia, his offseason workout partner, friend, and catcher, did not have high — or any — expectations as Anderson stepped up for the first time. A year ago with Double-A Richmond, Anderson had borrowed one of Garcia’s bats. Apparently the results were not memorable.

“In Richmond, man … it looked like, ah … we thought he was going to hurt himself with how hard he was swinging,” Garcia said, smiling.

Anderson, listed at 6-foot-4 and 225 pounds, is still swinging hard. And in his debut that swing twice put the barrel on an Edwin Jackson pitch, leading to two hits in a 4-3 win over the Blue Jays. He also pitched five solid innings, more than enough to guarantee a second start. That’ll come next week at Oracle Park, when Anderson will try to build on the historic start at the plate.

Anderson had an opposite field double that left the bat at 108.9 mph — giving him the 12th hardest-hit ball of the year by a Giant — and a seeing-eye single. He became the first pitcher in Giants history to have two hits in his debut and the first to do it for any team since the Mets’ Steven Matz in 2010.

So yes, for a few days, Shaun Anderson has bragging rights over Madison Bumgarner.

“I actually worked with him in spring training on hitting,” Anderson said. “So I can credit him a little bit.”

Anderson surely will slow down at the plate, but on the mound, the signs were just as positive. He gave up three runs — two earned — and all three were easily avoidable.

“They got a couple of cheap runs,” was how manager Bruce Bochy put it.

All three runs against Anderson were scored by Blue Jays leadoff hitter Brandon Drury, but just two were earned, and the rallies weren’t exactly concerning. Drury led off the game with a broken-bat bloop single to right and scored with two outs when Anderson threw one of just two curveballs on the day. It checked up near the bottom of the zone and Freddy Galvis yanked it into the right field corner.

“I was going with a different look,” Anderson said. “I went with the curve in the zone and left it right there and he got to it.”

Brandon Crawford, who hit the go-ahead homer after Anderson had departed, said that’s something that will change with experience. The curve might be Anderson’s fourth best pitch, and Crawford said he’ll learn to bury it in that situation. But Crawford did see something he liked in that moment.

“He was aggressive,” he said.

Two innings later, Drury drew a walk, went to second on a wild pitch, took third on a deep fly ball, and raced home on another wild pitch. Anderson got to the plate in time for the tag but dropped the ball as he collided with Drury. In the fifth, Drury reached on Evan Longoria’s error and went all the way to third when Anderson’s pickoff throw got down the line. He scored on a slow roller to third.

“That’s something I need to limit,” Anderson said of the wild pitches and errant pickoff. “Limiting those mistakes would have helped me win.”

Regardless, there was more than enough to build on. Anderson leaned heavily on a fastball that hit 95 and has natural cut. He can sink it or throw it straight to mix it up. He also threw plenty of hard sliders, with two different variations. The curveball will come with time, and Crawford, who faced Anderson in spring training, said the changeup is actually an underrated offering.

What does not need any sharpening is the demeanor. Anderson is known as a “bulldog,” and Garcia said he’s the type — in the Bumgarner mold — to stare a hitter down. Anderson showed confidence and aggression Wednesday, but he never appeared out of control.

“He’s one of my favorite guys to catch, for sure,” Garcia said.

[RELATED: Which teams make most sense in possible MadBum trade?]

With Buster Posey set to return Friday, Garcia may not be around for Anderson’s next start. But the important thing right now, for an organization looking for any signs of future life, is that Anderson earned a next start. Bochy left no doubt when asked, saying he’s in the rotation for now, which means a few more at-bats, at the very least.

“I didn’t know he could swing the bat like that,” Bochy said. “That’s a pretty nice debut, isn’t it?”