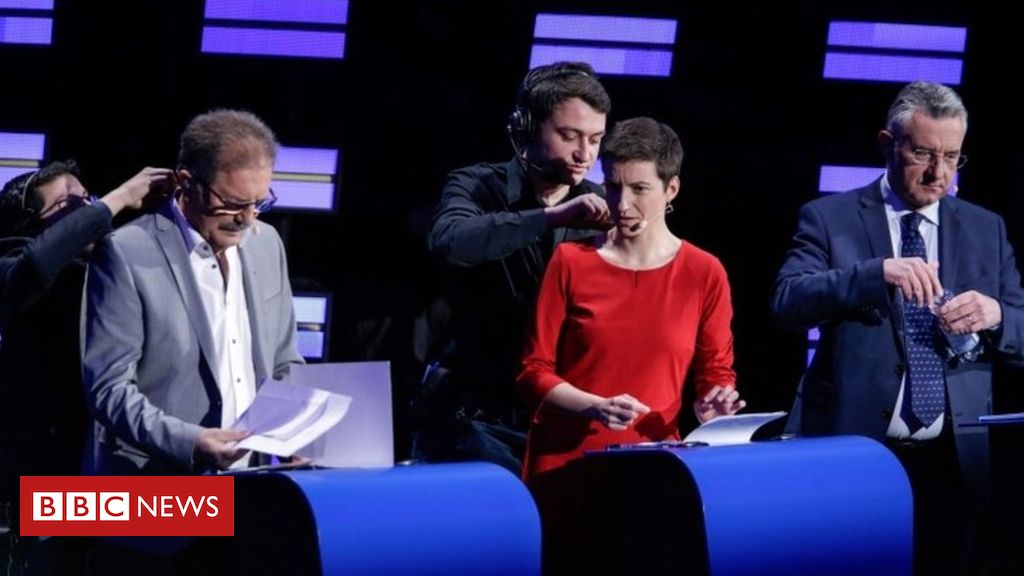 The candidates to take over from Jean-Claude Juncker as President of the European Commission have clashed in a televised debate broadcast across the EU.

It was part of the spitzenkandidat – or “lead candidate” – process, where contenders for the role are put forward by the pan-European groups of like-minded political parties in the European Parliament.

Each applicant has to be running in the European elections which will be held on 23-26 May.

The job comes with a staff of more than 30,000, a seat at summits of EU leaders and the right to propose new European laws.

The concept was tried for the first time in 2014. It is meant to make the appointment seem more democratic by putting the winner through something resembling an election campaign.

Six candidates were on stage in Brussels:

Manfred Weber has been a high-flyer in the EU’s influential bloc of centre-right parties from a young age. He often stresses his Bavarian roots as he promotes his 10-point plan for Europe.

He is the closest the contest has to a front-runner but the only thing he has ever run is the EPP delegation in the European Parliament.

He promised to appoint a commissioner to oversee a new relationship with Africa to help control migration to Europe. He said future trade deals with other countries would include clauses banning child labour.

But he had to fend off accusations that his centre-right colleagues had voted against climate change measures.

He is the supremely multilingual First Vice-President of the European Commission. The Dutchman steered through EU legislation banning plastic straws and negotiated the EU’s deal with Turkey to reduce the flow of migrants.

His signature proposal in the debate was a minimum rate of corporation tax across the EU of 18%.

Ms Vestager, from Denmark, currently oversees competition policy at the European Commission, where she led investigations that ended in big fines for Google and Apple.

But she admitted that the Commission had alienated voters.

“Last year we got digital citizens’ rights. That we called GDPR. How can we expect people to appreciate that?”

Unusually the Liberals have fielded a slate of six others for the EU’s top job, including the European Parliament’s Brexit co-ordinator Guy Verhofstadt.

This is Ska Keller’s second time as a spitzenkandidat. Although she is a Green, she is as likely to talk about the rights of migrants as the plight of the environment.

Dutch environmentalist Bas Eickhout is also standing for the Greens.

The far left’s representative is a former metalworker from Spain who grew up in Belgium.

“EU unity is at risk because of austerity policies of unheard-of violence being applied in Southern Europe,” he said.

He shares the role with Violeta Tomic, a former TV actress and member of the Slovenian Parliament.

The European Conservative and Reformists selected this Czech MEP to make the case for limiting the powers of the EU institutions and reinforcing the role of the individual member states.

He quoted opinion polls from his home country which showed that 90% of citizens wanted to stay in the EU but 70% did not want to join the single currency, the euro.

So who’s going to win?

Figures from various other political tribes had been mentioned as potential spitzenkandidaten but either failed to fulfil the criteria for taking part in the TV debate or never quite embraced the idea.

The includes the Deputy Prime Minister of Italy Matteo Salvini, the former Greek finance minister Yannis Varoufakis and Oriole Junckeras, currently in jail for his role in the Catalan independence referendum in 2018.

But there is no guarantee that any of them will end up as President of the European Commission.

Previously the job went to the person whose group won the most seats in the election.

That’s how Jean-Claude Juncker got the job five years ago, despite objections from David Cameron and the Hungarian Prime Minister Viktor Orban.

This time round, EU leaders have said the European treaties give them the sole authority to nominate someone for the role, and that they only have to nod towards the results of the European Parliament election when they make their choice.

The successful candidate then has to secure a majority in the European Parliament.

And the appointment is more likely to be the product of power-plays between countries, and the need for a gender and geographical balance among the EU’s other upcoming vacancies, which include the head of the European Central Bank, the President of the European Council and the bloc’s Foreign Policy chief.

“It means we might end up with everyone’s second choice,” explained one EU official.

That could be the EU’s Chief Brexit negotiator Michel Barnier who impressed many governments with his ability to keep 27 countries on the same page during the talks with the UK.

But the Brussels rumour mill’s current favourite fantasy candidate is the German Chancellor Angela Merkel, even though there is no evidence whatsoever she has any interest in the job.

The days after the European elections will see a race for control of the process that will pit the European political parties against EU leaders, who will discuss the issue at a special summit on 28 May.