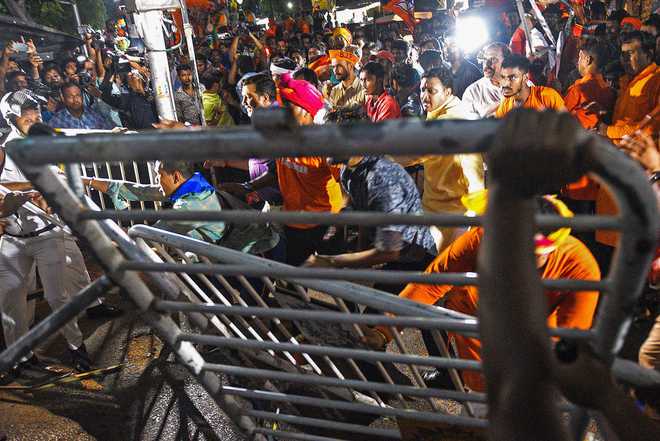 A SHATTERED bust of social reformer Ishwar Chandra Vidyasagar, a central figure of the Bengali Renaissance, on the campus of a college named after him speaks volumes about the barbaric free-for-all that Kolkata witnessed during political clashes on Tuesday. Supporters of the Trinamool Congress and the BJP went on the rampage as their confrontation reached a flashpoint before the final phase of the Lok Sabha elections. Stone-pelting, exchange of blows, torching of vehicles — it was a brazen display of hooliganism and lawlessness. West Bengal Chief Minister Mamata Banerjee is taking a holier-than-thou stance, even though she and BJP president Amit Shah are equally responsible for letting their workers run riot.

The violence comes three months after the CBI’s investigation into the Saradha and Rose Valley chit fund scams had triggered a slugfest between the Centre and the West Bengal government. It had taken the Supreme Court’s intervention to ensure that the law took its course amid a no-holds-barred turf war. The apex court had to step in on Wednesday too after the Trinamool government delayed the release of BJP’s youth wing leader Priyanka Sharma, who had been arrested for allegedly posting a morphed image of Banerjee on social media.

Caught in the crossfire, the Election Commission (EC) is being accused by both camps of adopting double standards. Shah claims that the poll panel failed to ensure that all history-sheeters were behind bars before the polls in West Bengal, while Banerjee has alleged that the EC is going soft on the BJP over the rampant use of unaccounted money in the elections. It is imperative for the commission to remain unpartisan and take strict action against erring political parties. With its credibility being put to the test repeatedly in recent weeks, the EC should put its foot down once and for all. A free and fair inquiry into the Kolkata fracas is a must to bring out the whole truth and uphold the rule of law. Ahead of Sunday’s polling, there is a pressing need to scuttle politicians’ attempts to mislead voters with half-truths and untruths.