The Pelicans hit the lottery jackpot, but could the Celtics reap an award? – The Boston Globe 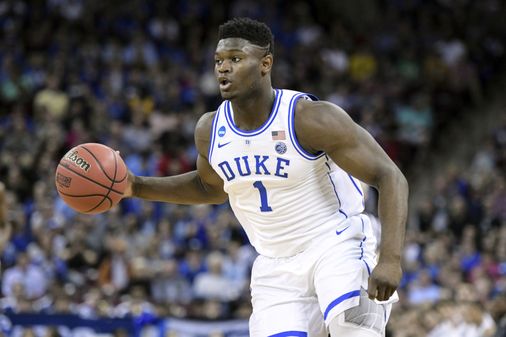 With a top six or seven pick, the Pelicans would not have had as much bargaining power, but now they can even sell their fan base on the future — with Williamson — even if they trade Davis. If Davis does maintain his trade demand, the asking pride may differ because Griffin will want young players to build around Williamson.

The 6-foot-8-inch, 285-pound Williamson is the most unique prospect to enter the draft since Giannis Antetokounmpo and most touted prospect since LeBron James. He gives the Pelicans a centerpiece to replace Davis and provides Griffin an opportunity to avoid completely rebuilding without the perennial All-Star.

Griffin plans to meet Davis in the coming days to discuss his future. And if the GM decides to make a trade, the Celtics will most certainly be the primary suitors, but the draft lottery results also affected how other clubs can pursue Davis.

The New York Knicks were hoping for the top overall pick to add Williamson to their lot of younger players and then chase Kevin Durant and Kyrie Irving in free agency. With the third pick, the Knicks don’t have much bargaining power to pursue Davis. An R.J. Barrett package with future draft picks, and let’s say Kevin Knox, is not likely going to be enough to sway Griffin into moving Davis.

With the Knicks’ chances of getting Davis dampened, the Lakers could emerge as a legitimate contender because they shot up to the fourth overall pick. The Lakers essentially need another young prospect on their team like a parking ticket; GM Rob Pelinka wants to add another major free agent and perhaps also Davis through a trade and that fourth pick could become part of a package.

The Lakers had a 77.6 percent chance to get the 11th overall pick and instead jumped seven spots, altering how they can approach the summer in terms of trading for another marquee player to join James.

The Memphis Grizzlies earned the second pick and they desperately needed a boost in their rebuild. They scored well by drafting Michigan State forward Jaren Jackson Jr. last June and now could add remarkable athlete Ja Morant and find a trade partner for guard Mike Conley.

The Grizzlies don’t yet have a coach and already moved longtime veteran Marc Gasol, so the rebuilding is beginning. The good thing for the Celtics is that they own the Grizzlies’ pick next season (top-six protected), so they will again will be an interested party in next year’s lottery to determine if they get that pick.

What this lottery did prove to NBA teams is that “tankers” never prosper (is that the old saying?). Teams such as the Knicks, Phoenix Suns, Cleveland Cavaliers and Chicago Bulls lined up their rosters with younger players and benched veteran, productive players for the express purpose of getting a high draft pick and making a run at Zion, and it failed miserably.

The Suns were tied with the Knicks and the Cavaliers with 14 percent odds to get the top pick. Instead, they will pick sixth. The Cavaliers got the fifth pick, while the Bulls (12.5 percent) will draft seventh.

The Celtics draft 14th, 20th and 22nd in the first round and may get a better player at 22 than 14, giving their brass a real opportunity to upgrade the roster with an overshadowed talent.

But the Celtics have to be pleased with the Knicks losing out on Williamson, which may have served as incentive for Irving to sign there and also could have served as a trade chip for Davis. The Grizzlies get a chance to add perhaps the best athletic guard to enter the draft since Russell Westbrook and continue to supplement their roster with young, exciting players.

Would the NBA prefer Williamson going to the Knicks rather than the Pelicans? Perhaps. But this lottery ends those assertions that the lottery is fixed and commissioner Adam Silver was going to reward the Knicks for their years of suffering with the chance to take a once-in-a-lifetime player.

Instead, Williamson becomes the biggest thing in New Orleans since Café Du Monde beignets and the Pelicans get a boost after spending a miserable season dealing with Davis’s sudden trade demand.

Better still, the stunning results of the draft lottery
should, going forward, deter downtrodden teams from losing on purpose in the hopes of hitting a jackpot.