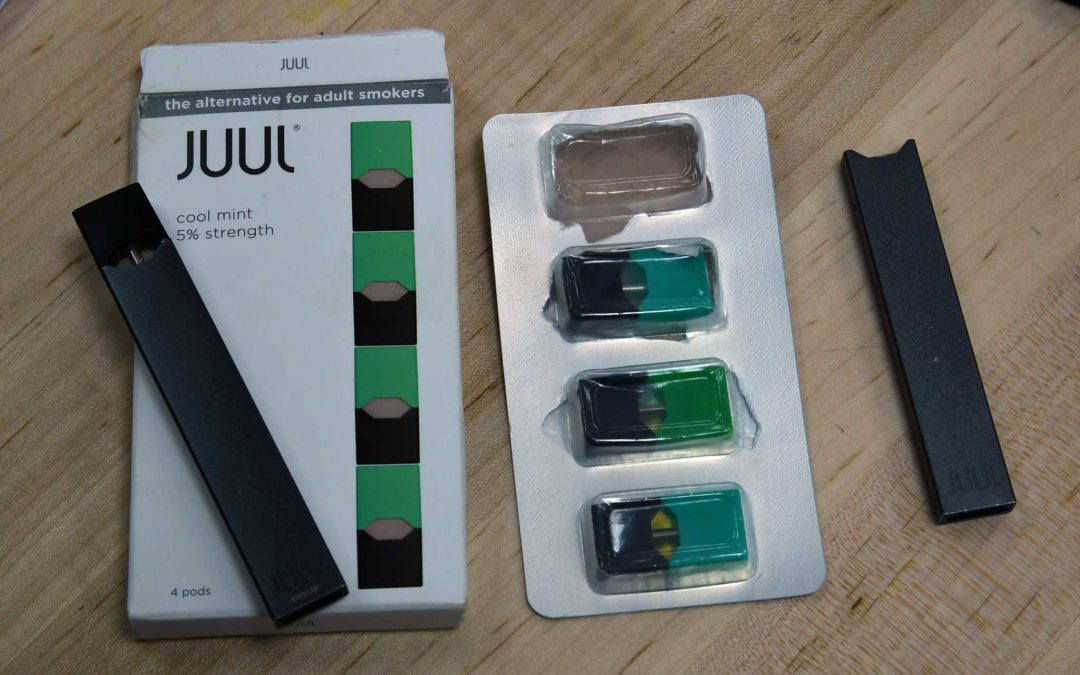 JUUL devices are popular with teens and adults looking for smoking-cessation help.

JUUL devices are popular with teens and adults looking for smoking-cessation help.

The suit, filed in state court, alleges that Juul caused addiction in consumers by “deceptively downplaying the potency and danger of the nicotine” and employed advertising campaigns that targeted people under the legal smoking age.

Several of the state’s requests overlap with existing Food and Drug Administration policies, including prohibiting the sale of e-cigarette products to minors. But the state’s complaint goes further: FDA guidelines restrict the sale of e-cigarettes with fruit or candy flavors in stores, allowing menthol, tobacco and mint to be sold. North Carolina’s request would bar the mint flavor there, in addition to the popular flavors like mango and cucumber.

All Juul flavors can be purchased online after customers verify their age on the Juul website. Stein hopes to restrict those sales, too, by preventing all customers in North Carolina from purchasing flavors online that aren’t tobacco or menthol.

And the state is asking the court to apply a marketing and advertising ban that mimics that of the Tobacco Master Settlement Agreement that went into effect in 1998. It would prevent the company from emails, advertising or social media marketing aimed at minors. It also asks the court to block Juul from advertising outdoors and near schools or playgrounds; sponsoring “sports, entertainment, or charity events”; offering free or discounted samples; or promoting products with fashion or media outlets that primarily target consumers under 30.

“Addicting a new generation of teenagers is unacceptable, illegal, and that’s why I’m taking action,” Stein told The Washington Post. “This is about a company that is selling its product predominantly to (youths). There has to be some limitation on the way they do business.”

“I certainly would welcome any state that wants to bring a similar action,” he added.

In a statement to The Post on Wednesday, a Juul spokesman said, “While we have not yet seen the complaint, we share the Attorney General’s concerns about youth vaping, which is why we have been cooperating with his office and why we have taken the most aggressive actions of anyone in the industry to combat youth usage.”

In the past year, Juul ceased the sale of all flavors besides tobacco, menthol and mint to traditional retail stores. The company enhanced its online age-verification process and shut down its Facebook and Instagram accounts. Juul says it also revamped its marketing and commercial campaigns, strengthened its retailer compliance program with more than 2,000 secret shopper visits per month and led industry support of state-based Tobacco 21 laws, which raise to 21 the legal minimum age for all tobacco products.

According to Scott Gottlieb, a former FDA commissioner, attorneys general have an important role to play in keeping nicotine products away from children and teens.

“(Nicotine addiction) is becoming a big enough health problem that even states are going to feel it,” he said, noting the fiscal and public health impact on states. “All the gains we made in smoking could be reversed.”

Under Gottlieb’s leadership in March, the FDA issued a new policy restricting the sale of flavored e-cigarettes. Agency rules, which are binding on regulated entities, do not preempt attorneys general from creating additional restrictions at the local level.

Between 2000 and 2017, tobacco use dropped from 28% to just above 5% of teenagers in the U.S., the lawsuit says. But in the three years since Juul was introduced to the market in 2015, that pattern changed.

Last year, Juul’s retail sales exceeded $650 million, making the it the largest e-cigarette brand on the market, according to a study published by Tobacco Control. Juul users consist mostly of individuals under 21. A study released by the North Carolina Department of Health and Human Services showed that within the past year, use of e-cigarettes increased among high-school-age youths by 78%, and among middle schoolers by 48%.

Vape sales in the United States have climbed. At the same time, Nielson data confirms, cigarette sales declined by at least 5% last year and up to 8% in recent months; a single percentage point represents 2 billion to 3 billion fewer cigarettes smoked. Another study, funded by Juul, showed that after three months of using Juul products, nearly 50% of adult smokers moved off combustible cigarettes completely.

The North Carolina lawsuit argues that the flash-drive-size e-cigarette has played a central role in “fostering the epidemic of e-cigarette use among youth.”

“To the extent that (Juul) has anecdotally been shown to help some adults quit smoking, that’s great,” Stein said. “Adults seeking to quit smoking can use the same flavors currently available to them, tobacco and menthol.”

Research demonstrates that many adults also prefer sweet flavors in their vaping devices “and disliked flavors that elicit bitterness or harshness,” according to a review of nearly 13,000 peer-reviewed studies, though it found inconclusive evidence of a connection between flavors and cessation.

Although “Juuling”- the verb often used to describe smoking with the device – can be an aid in quitting cigarettes, that didn’t appear to be a Juul objective when the company set out.

“We don’t think a lot about addiction here, because we’re not trying to design a cessation product at all,” Juul research engineer Ari Atkins told The Verge in 2015, adding later that “anything about health is not on our mind.”

In a March op-ed, Juul Labs CEO Kevin Burns outlined the tangible changes the company made to fight youth Juuling after consulting with the FDA. But opponents like Stein and Gottlieb believe the Juul business model to date has been almost predominantly an on-ramp for new youth smokers.

“They cleaned (their marketing) up, and it’s currently focused on adult smokers,” Gottlieb said. “But you can’t unring the bell and undo what was done since they launched.”