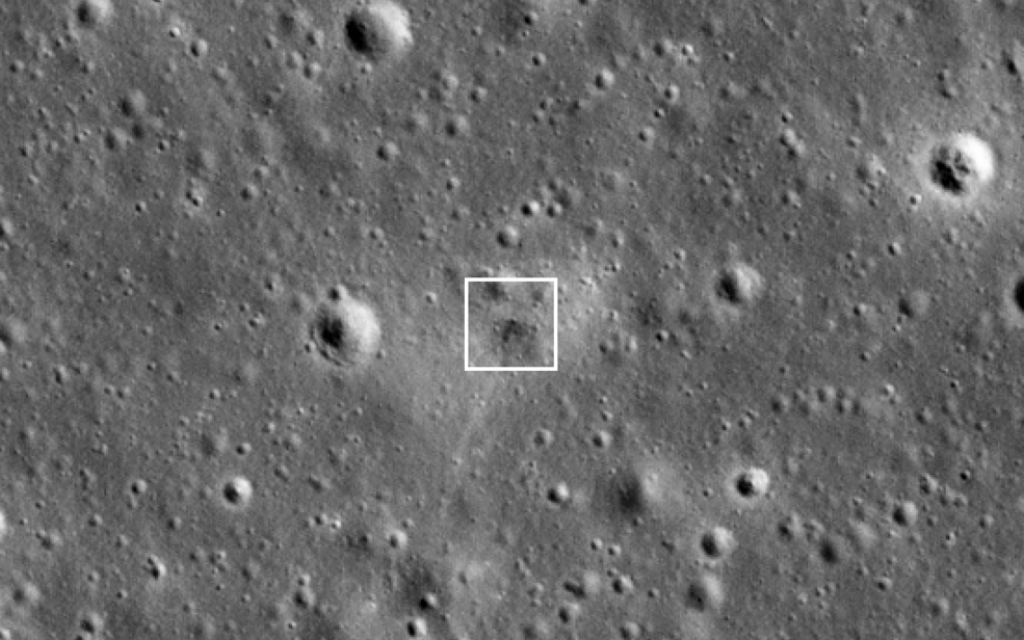 WASHINGTON — NASA released pictures on Wednesday of the impact site where Israel’s Beresheet spacecraft crashed on the moon, saying it appeared as “a dark smudge, about 10 meters (yards) wide” on the lunar surface.

Despite successfully reaching lunar orbit, the tiny Israeli spacecraft crashed during a landing attempt on April 11. Project leaders vowed they would fix the technical problems behind the crash and make a second attempt to become the fourth nation to safely land a probe on the moon.

NASA said that the pictures were taken by its Lunar Reconnaissance Orbiter when it passed overhead from a height of 90 kilometers (56 miles) above the surface.

“The cameras captured a dark smudge, about 10 meters wide, that indicates the point of impact. The dark tone suggests a surface roughened by the hard landing, which is less reflective than a clean, smooth surface,” NASA said.

Left: Beresheet impact site. Right: An image processed to highlight changes near the landing site among photos taken before and after the landing, revealing a white impact halo. Other craters are visible in the right image because there is a slight change in lighting conditions among the before and after images. Scale bar is 100 meters. North is up. Both panels are 490 meters wide.
( NASA/GSFC/Arizona State University)

NASA said it was not clear if the spacecraft caused a crater in the lunar surface, saying it’s angle of impact may have been too shallow. However, it noted that “Beresheet’s speed was still faster than most speeding bullets.”

The light halo around the impact site could have been caused by “gas associated with the impact or from fine soil particles blown outward during Beresheet’s descent.”

The US space agency said it was almost certain that the impact site was man-made and not from one of the many meteors that  regularly bombard the moon’s surface, noting the many before-pictures of the site and that it conforms to the mathematical models of what the crash site was expected to look like, and the expected coordinates in an area called the Sea of Serenity

What is also not clear from the pictures is the fate of the digital library that was on board the craft.

The library contains a 30-million page archive of human history and civilization covering all subjects, cultures, nations, languages and genres. It is housed in a 100-gram (0.2-pound) stack of 25 nickel discs, each only 40 microns thick, that were etched using nanotechnology.

In this file photo taken on December 17, 2018, a digital time capsule including drawings by Israeli children, pictures of Israeli symbols like the flag, Israeli songs and a booklet written by a Jewish man of his experience of the Holocaust, which would go on to be placed in the Beresheet spacecraft, is displayed during a presentation by Israeli nonprofit SpaceIL and Israeli state-owned Israel Aerospace Industries in Yehud, east of Tel Aviv. (Jack Guez/AFP)

Canadian astronaut Chris Hadfield has said he would like to search for it, calling the discs “a 30 million page Frisbee on the Moon — I hope to pick it up some day.”

Beresheet  was a joint venture between the Israeli nonprofit SpaceIL and Israel Aerospace Industries, funded almost entirely by private donations from well-known Jewish philanthropists, including Kahn, Miriam and Sheldon Adelson, Lynn Schusterman, and others.

The 100 million (NIS 370 million) cost of the first lander was a fraction of the cost of previous, state-funded efforts to land on the moon.