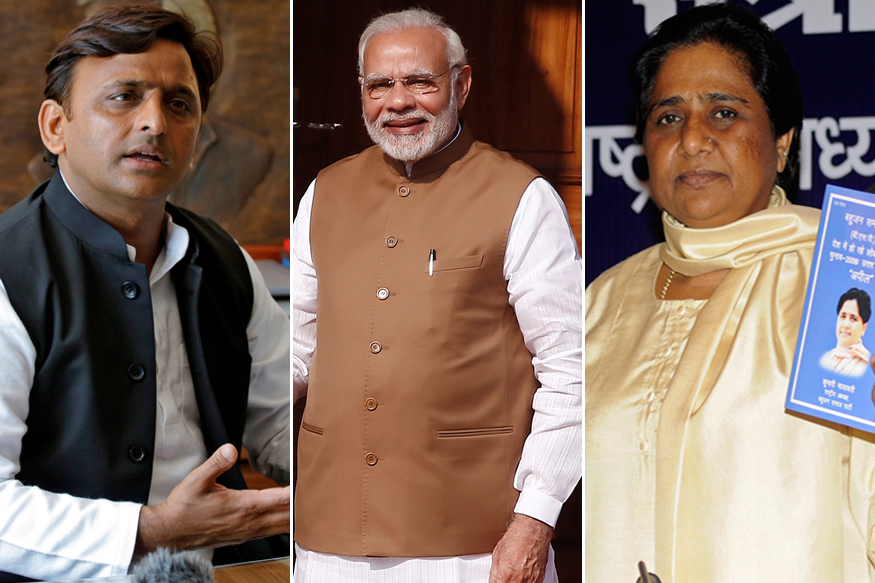 The Bharatiya Janata Party, whose spectacular victory in Uttar Pradesh in 2014 had propelled it to a brute majority in the Lok Sabha, is predicted to once again put up a strong show in the electorally crucial state with the BSP-SP-RLD alliance failing to work to its maximum potential.

The state, however, has thrown up confusing numbers from various pollsters. While some have given an edge to the mahagathbandhan, the others have predicted BJP way ahead in UP. On the other hand, the exit polls have shown BJP climbing down to 71 seats from 80 it had won in the state in last general polls.

While Times Now CVoter has given BJP+ 38 seats in UP,

40 seats, and Congress two seats; ABP Nielsen has predicted the

The confusion among the pollsters show that several questions remain unanswered. Here’s a list of some of these questions:

1. The impact of Congress — whether it ate into the upper caste vote share of the BJP or whether it split a section of MGB vote-share — and that of Priyanka Gandhi.

3. The impact of Mayawati’s specific appeal to Muslim voters, for which she was banned from campaigning for 48 hours.

4. The strength of Narendra

5. The reverse polarisation of upper caste plus Non-Yadav OBCs and non-Jatav Dalits towards BJP, and so on.

In Uttar Pradesh, the question was always about not “whether” the BJP would lose seats, but “how many”, considering the landslide win last time and the stiff challenge posed by the coming together of erstwhile rivals — the Samajwadi Party and the Bahujan Samaj Party — after the successive drubbings of 2014 and 2017.

For most political pundits and psephologists, the electoral outcome was predicated on the strong caste foundations of the gathbandhan, which counted on the solidarity of the Backward and Dalit castes — that is the OBCs and SCs — along with the undisputed support from the strong Muslim population.

Together with the added support of pre-dominantly Jat-based Party, the RLD, in Western UP, the arithmetic was considered strong enough to stop the BJP juggernaut.

But it was always conditioned on how well the two parties are able to transfer their vote banks to each other and how the cadre of the two parties work together at the ground level. To that end, both Akhilesh and Mayawati held a series of joint rallies across the state.

The BSP chief and SP patriarch Mulayam Singh Yadav also came together on a stage after a gap of 24 years, setting aside political acrimony to ensure that the message of harmony percolates down to the support bases of both parties.

For the BJP, although there was no Modi ‘wave’ that had diluted caste boundaries, there was still a strong-enough current in the Prime Minister’s favour and the party’s entire campaign revolved around him and how there was no alternative to him. This discourse and desire for a ‘strong leader’ also helped overshadow the more pressing concerns in the state like rising unemployment, agrarian crises and stray cattle menace.

While in West UP, the BJP made attempts at subtle communal polarisation through debates like “Ali vs Bajrangbali”, and there was a slight jingoistic appeal for Hindu nationalism through exaggerated claims about national security and Pakistan bashing, the campaign narrative was centered more around caste appeal as the election moved towards east UP.

It’s for this reason that Prime Minister Modi on multiple occasions reminded of his “most backward caste” credentials and also tried to converge caste dynamics through common agenda of poverty.

Similarly, gathbandhan leaders Mayawati and Akhilesh Yadav desperately tried to thwart BJP’s attempts at counter polarisation and stop it from wooing non-Yadav OBCs and non Jatav/chamar SC by hitting out at the PM as a “fake OBC”.

Despite its numerical strength, the alliance failed to bring forth a “policy alternative” to the Modi-led BJP government, and solely relied on caste calculations, making it tough to forge a larger consolidation of various castes and sub-castes under the OBC and SC bracket.

Then, there was the Congress factor, equally baffling for both the alliance as well as the BJP. Though Congress general secretary Priyanka Gandhi claimed that her candidates if not winning will actually cut into BJP’s vote bank, the reality was that it would also hurt the alliance prospects on certain seats.

Mayawati and Akhilesh’s original calculations of Congress as a third player, eating into BJP’s core upper caste vote bank, got disturbed when the Congress decided to go full throttle in UP by launching Priyanka in politics.