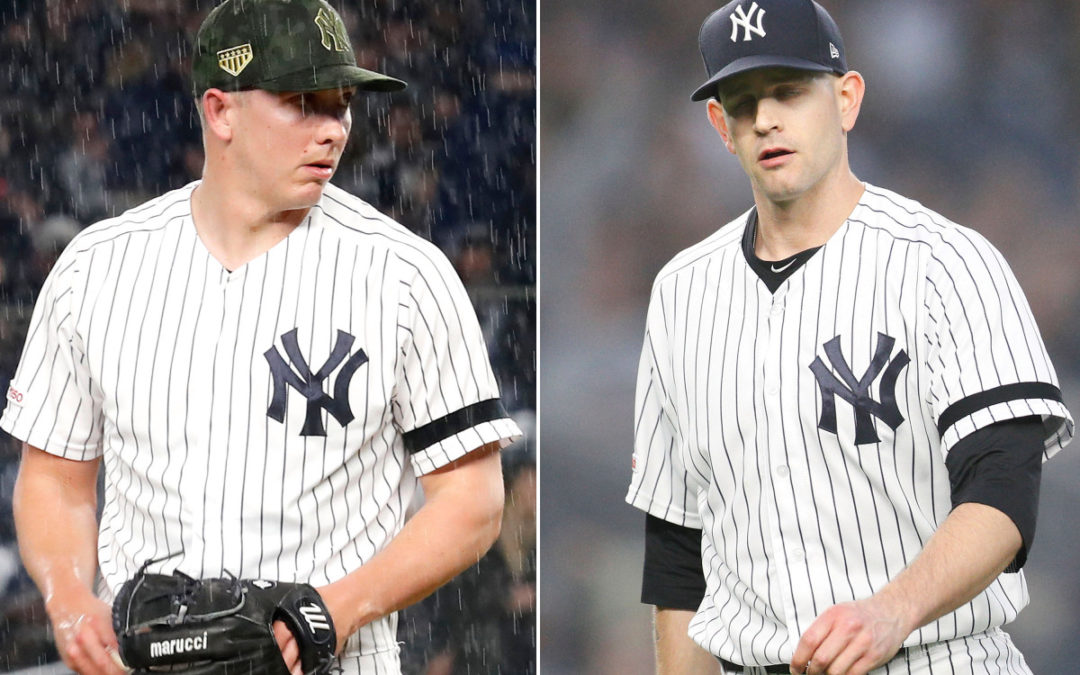 James Paxton is still out with left knee inflammation, so the Yankees will turn to Chad Green to start Sunday’s series finale against the Rays in The Bronx.

They also have Chance Adams and Nestor Cortes Jr. to eat up some innings, though the task will be tough with Rays right-hander Charlie Morton on the mound.

Paxton is scheduled to throw another bullpen session Sunday in the hope the discomfort he still is experiencing is no longer there.

“I’d like to get on the mound Sunday and not feel anything,’’ said Paxton, who is on the 10-day injured list. “It’s been less and less every time I’ve thrown a bullpen. I still felt it a little bit [Friday].”

Manager Aaron Boone and Paxton both said they were encouraged by how the left-hander felt when he showed up at Yankee Stadium before Saturday’s game.

“I was good this morning,’’ Paxton said. “I’ll throw another bullpen [Sunday] and keep it going.’’

Paxton had hoped not to feel anything troublesome Friday, but that was not the case.

“I know it’s there,’’ Paxton said. “I was definitely hoping not to feel anything and I was aware of it a little bit.”

He expects the most significant challenge Sunday to be when he tries to throw inside fastballs to right-handed hitters because of the stress the pitch puts on his knee.

“If I can do that without pain [Sunday], that will be the test,’’ Paxton said.

Despite allowing three hits and a pair of runs in Friday’s win, Green said he remains pleased with how he’s throwing the ball since his return from a stint with Triple-A Scranton/Wilkes-Barre.

“I actually felt like my fastball was as good as it’s been all year [on Friday],’’ said Green, who gave up the two runs to the Rays on Friday, but was bailed out when the Yankees rallied for the win in the bottom of the ninth. “I just missed with one or two pitches.”

Green had a 16.43 ERA in his first 10 appearances this season before the Yankees sent him down to the minors to work on his mechanics. He was overpowering in his first outing after he returned to the majors.

Clint Frazier didn’t start against left-hander Blake Snell, but entered as a pinch-hitter in the seventh and went hitless in two at-bats to drop to 6-for-37 since returning from a sprained ankle — though Boone said he is confident the injury is not the reason for Frazier’s recent slide at the plate.

“He’s probably missing his pitch a little bit,’’ Boone said before Saturday’s 2-1, 11-inning loss to the Rays. “He hasn’t been walking much, but he’s doing an OK job of controlling the strike zone and getting in deep counts.”

The issue is what Frazier has been doing once gets there.

“He hasn’t won the 3-2 count or when he gets his pitch, where he was doing damage for a couple weeks, now he’s fouling that pitch off or missing that pitch,’’ Boone said. “I think it’s small and subtle. He’s always capable of turning that right around because he does control the strike zone for a young player.”

As for the ankle that sidelined him earlier in the month, Boone said, “I think he’s fine.”

Aaron Hicks had a pair of singles — one from each side of the plate — for his first two hits of the season in his third game back from a lower back injury that had sidelined him since spring training.