James Comey blasts AG Barr, accuses him of ‘sliming his own department’ 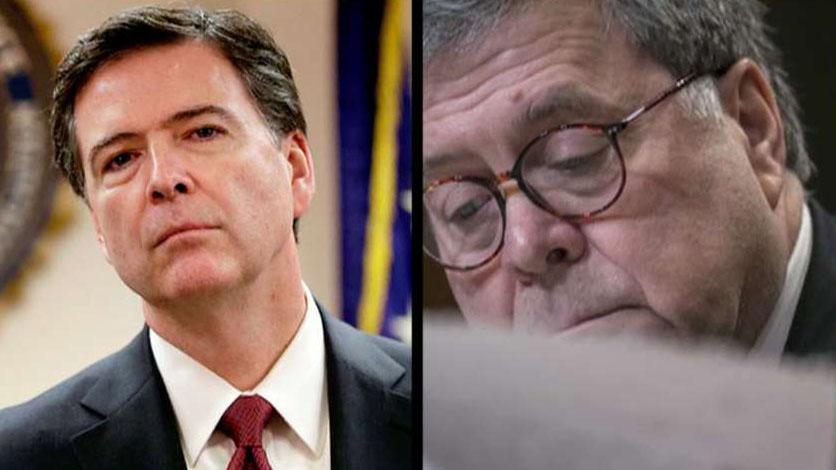 Former FBI Director James Comey ripped into Attorney General William Barr on Friday, accusing him of “sliming his own department” after Barr said that government power was used “to spy on American citizens.”

“The AG should stop sliming his own Department,” Comey tweeted. “If there are bad facts, show us, or search for them professionally and then tell us what you found.”

“An AG must act like the leader of the Department of Justice, an organization based on truth,” he said. “Donald Trump has enough spokespeople.”

Comey did not specify what comments he was reacting to, but the tweet came after Barr gave interviews to Fox News and The Wall Street Journal about the investigation into the origins of the Russia investigation, that he has tapped U.S. Attorney John Durham to lead.

Barr told Fox News that the investigation will cover the time period between Election Day and Inauguration Day, and he told Fox News’ Bill Hemmer that “some very strange developments” took place during that period.

Barr said the country must know “exactly what happened” with counterintelligence activities conducted during the 2016 election — and he is determined to get to the bottom of the case.

“The first step is to find out exactly what happened, and we’re trying to get our arms around that, getting all the relevant information from the various agencies and starting to talk to some of the people that have information,” Barr told Hemmer.

AG BARR DETAILS HIS HUNT FOR THE TRUTH ON WHAT REALLY WENT ON WITH THE RUSSIA PROBE: LISTEN TO THE FULL INTERVIEW

“It’s a very unusual situation to have opposition research like that, especially one that, on its face, had a number of clear mistakes and in a somewhat jejune analysis,” Barr said. “And to, and to use that, take it to conduct counterintelligence against an American political campaign is a strange — would be a strange development.”

He told The Wall Street Journal that the investigation could lead to rule changes for counterintelligence investigations of political campaigns.

“Government power was used to spy on American citizens,” he said. “I can’t imagine any world where we wouldn’t take a look and make sure that was done properly.”

Comey’s comments came just days after former Deputy Attorney General Rod Rosenstein accused the former FBI chief of being a “partisan pundit” and trampling on “bright lines that should never be crossed.”

“Now, the former director is a partisan pundit, selling books and earning speaking fees while speculating about the strength of my character and the fate of my immortal soul,” Rosenstein said. “That is disappointing. Speculating about souls is not a job for police and prosecutors. Generally, we base our opinions on eyewitness testimony.”

Fox News’ Brooke Singman, Liam Quinn and Gregg Re contributed to this report.