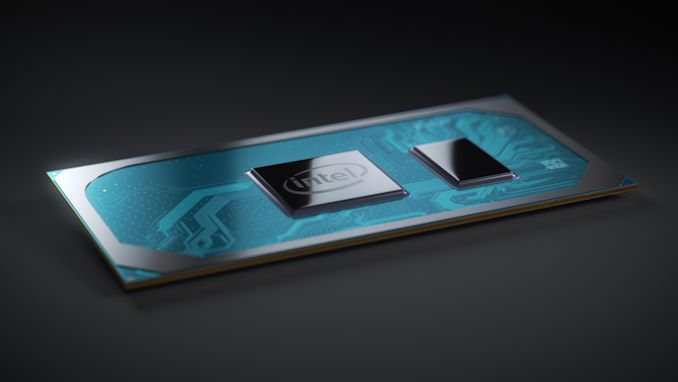 At Intel’s Keynote presentation here at Computex, the company finally lifted the lid on its first widely available new CPU design on its 10nm process, called Ice Lake. The official marketing name for these processors will be ‘Intel 10th Generation Core’, and will feature up to four CPU cores with Intel’s new Sunny Cove architecture, new Gen11 graphics supplying up to 1TF of graphics/compute performance, and built in support for Wi-Fi 6 and Thunderbolt 3.

The story of Intel’s 10nm is a long and drawn out one, which we covered when we reviewed the first 10nm CPU, Cannon Lake, which only ended up in some limited Chinese system launch. Fast forward almost 2.5 years from when Intel officially announced it was shipping those 10nm CPUs and we have a full launch of Ice Lake, built on the company’s greatly refined second-generation 10+ process. Intel spent a lot of its keynote presentation going through how it has driven the ecosystem and its ecosystem partners around developing systems with the new CPU in mind.

Intel is officially launching 11 different CPUs in the 10th Gen Core lineup, ranging from Core i3 to Core i7. Details on the specifications of those CPUs has not actually been released, which raises a number of questions of how much of a launch this actually is, however we do know that the best CPUs will have a turbo frequency up to 4.1 GHz and a top GPU frequency of 1.1 GHz. Users might consider this lower than 9th Gen mobile parts, which again raises questions. CPUs will be coming to market with 9W, 15W, and 28W variants.

Intel’s partners however have given us some specifications, and it shows in interesting adjustment in the naming scheme.

At this point in time we’re not sure exactly what the ‘G7’ or ‘G1’ means in the name. It could be related to graphics, given that Intel will launch CPUs with 32 EUs, 48 EUs, or 64 EUs.

In accordance with their trio of TDPs, Intel has confirmed that there will be both Y-series and U-series Ice Lake parts. As a refresher, Intel’s Y-series parts are their most compact, lowest-power chips, designed for passively cooled devices and other devices with limited cooling options, like 2-in-1s. Y-series chips have a nominal TDP of 9W – notably higher than the 5W TDPs for the current-generation Amber Lake-Y parts – and will be able to cTDP Up to 12W. Meanwhile Intel’s U-series will, it appears, be the flag bearer for Ice Lake. These parts will have a nominal TDP of 15W, and can cTDP Up to 25W.

According to Intel’s official product brief, both the U-series and Y-series parts will come with integrated GPUs with up to 64 EUs – this being particularly notable since the Y-series parts are going to be so low power. However it looks like Intel is going to split up the U-series a bit; 32 EU parts are listed as “Ice Lake U UHD”, while 48 and 64 EU parts are “Ice Lake U Iris Plus”. So Intel’s Iris Plus branding will remain; and hopefully Iris Plus Ice Lake SKUs will be more common than today’s Iris Plus parts.

Intel has discussed Ice Lake to a certain degree back in December and more recently at a private event, which we will be publishing after Computex to give it the attention it deserves. But the new core is designed to have more execution units, wider out-of-order windows, better load/store functionality, a bigger cache arrangement, and Intel states that this is good for an average 18% raw clock-for-clock performance uplift compared to the original Skylake core released in 2016.

Users might be surprised about this 18% number, given that Intel has historically only provided low single digit boosts in recent generations. The reason for those single digit boosts comes down mainly to small parts of the core microarchitecture being widened. For Ice Lake, the doubling of the L2 cache, the increase in execution ports, and the dispatch capabilities of the front end of the core all provide big improvements. Intel also states that the pre-fetchers are improved, which also helps with that 18% IPC increase. It will be interesting to get hold of a system and to actually test/compare with Skylake, especially with all the security patches applied.

For graphics, Intel is stating that the best 10th Gen Core designs will be able to compete with what AMD has to offer with its mobile APU platforms. By increasing the number of execution units from 24 EUs to 64 EUs, Intel is promising over a 2x boost in graphics performance, which is facilitated by the better cache design on the CPU. The new graphics architecture, along with aggressive driver updates, should provide Intel better positioning in the thin-and-light gaming market. Benchmarks shown by Intel include many of the popular titles running today at 1920×1080 at either low or medium settings.

Core functionality aside, the new chips are also incorporating some of the latest I/O features. The biggest news here, of course, is integrated Thunderbolt 3 support for the on-chip 300 series mobile chip, finally doing away with the need for a separate PCIe-to-Thunderbolt controller. Not only will this save laptop OEMs space in their design, but as it’s now a baseline feature of Intel’s mobile chips, Thunderbolt 3 should become nearly ubiquitous across low-power laptops. Which considering that Thunderbolt 3 has been released to the world at large to be used as the basis for USB4, it’s clear that Thunderbolt technology is quickly going to become a necessary feature for future laptops.

The other notable change here is support for Wi-Fi 6 (802.11ax), via Intel’s increasingly well-established CNVi program. As with Intel’s first-generation integrated Wi-Fi 5 functionality, Wi-Fi 6 is integrated in two parts. The Wi-Fi 6 Media Access Controller (MAC) is on Intel’s chipset, meanwhile the RF hardware is on a separate companion module. Going this route is optimal for OEMs for regulatory reasons – the RF module can be certified separately – though it does mean they’ll need to buy the RF module to make use of the processor’s on-chip Wi-Fi capabilities. Interestingly, neither Intel nor the rest of the industry is wasting any time here; even though the Wi-Fi 6 standard hasn’t been fully approved yet – it’s still draft – it’s already being integrated into hardware wide and far, including now mobile PC processors.

Overall, a number of ecosystem partners are at the Computex show with 10th Gen Core designs, including Dell, HP, Lenovo and others. For this new generation, Intel is also pushing its new Athena project, which we’re covering in a separate article.

AnandTech’s deep dive coverage of Intel 10th Gen Core will continue after Computex, with more details an analysis of the core microarchitecture. We’re also working with Intel to get more access to Ice Lake platforms so we can provide a full testing profile of the new CPU family.