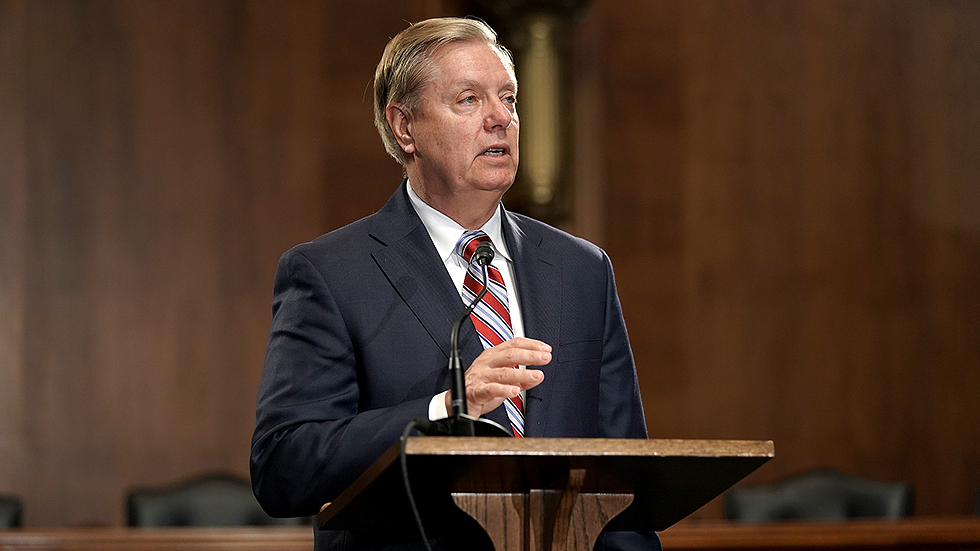 Frustrated Senate Republicans say the Trump administration has largely kept them in the dark about a possible military confrontation with Iran.

What GOP lawmakers already know, however, has them on edge. Trump has deployed an aircraft carrier strike group, a Patriot missile defense battery and an Air Force bomber task force to the Middle East, while the State Department has ordered a partial evacuation of the U.S. Embassy in Baghdad.

A few legislators have received briefings, but many can only guess at the extent of the threat and where a ramp up in combat forces may lead.

Graham, the chairman of the State and Foreign Operations Appropriations Subcommittee, said he’s concerned about the evacuation of personnel from the Baghdad embassy given the regular attacks that facility endured during the height of the Iraq War.

“We’re clearly moving people,” he said. “This is a big deal.”

“We had people there during the height of the war,” he added of his experience at the Baghdad embassy. “I was there a bunch of time getting rocketed. If we could stay in operation then, it must be some kind of real threat.”

Republican senators say they don’t know whether Trump is really contemplating the deployment of 120,000 troops to the Middle East to deter attacks by Iranian-backed militants, which The New York Times first reported on Tuesday.

“There should be more briefings. I think we should have that sooner rather later. I’ve talked to the administration about that,” he said, referring to conversations he had in the previous 24 hours.

Gardner, a member of the Senate Foreign Relations Committee, noted that lawmakers don’t have an administration assessment on news reports that Iranian proxies were given the green light to attack U.S. personnel in the Middle East.

Asked if he was worried about a rapid escalation of military hostilities, Gardner responded, “Anytime you’re dealing with a regime like Iran that has painted ‘death to America’ on missiles that have killed American soldiers throughout the Middle East, it’s a grave concern.”

One alarming scenario is that Saudi Arabia, which is waging a military campaign in Yemen’s civil war, could launch a retaliatory attack against Iran and draw U.S. troops into a regional conflict. Saudi officials stated Tuesday that Houthi rebels in Yemen, who are backed by Iran, have carried out multiple drone attacks on Saudi oil pumping stations.

Sen. Rand PaulRandal (Rand) Howard PaulTrump Jr. reaches deal to testify with Senate Intelligence GOP voters in New Hampshire back Trump Trump weighs in on blowback to Trump Jr. subpoena: ‘Really sad’ MORE (R-Ky.) said he has warned the administration that it does not have congressional approval to go to war with Iran.

“I think it’s important that the administration know that they do not have the permission of Congress to go with Iran. The Constitution is very clear. Congress must declare war. I told the administration that today in our hearing. We had the undersecretary for policy from State. We want to be very clear to them they don’t have the prerogative to go to war without our authority,” he said.

Lawmakers have questions about the intelligence the Trump administration is using to justify the military deployment, which Britain, a close military ally, has called into doubt.

A senior British military official told reporters Tuesday that he did not see an increased risk of attack from Iran or connected militant groups. Major Gen. Chris Ghika, the deputy commander of a U.S.-led coalition battling ISIS, told The New York Times that “there has been no increased threat from Iranian-backed forces in Iraq or Syria.”

GOP lawmakers say they are more inclined to trust American intelligence sources but feel frustrated that the administration hasn’t shared their information with the vast majority of them.

“We know that we need to have the most accurate intelligence available, that we can determine, that we can arrive at, before we make any decisions about the use of military force. We know that from history. We know that just as a practical matter,” said Sen. Jerry MoranGerald (Jerry) MoranThe Hill’s Morning Report – Presented by Pass USMCA Coalition – Major fallout from China trade talks collapse Facebook COO Sheryl Sandberg meets with senators on privacy FBI director says he wouldn’t use ‘spying’ to describe investigations MORE (R-Kan.).

He called for senators to have a full briefing, arguing, “I think there’s a lot more to be known before decisions are made.”

A briefing of the entire Senate is expected next week, though some Republicans contend that could be too late given the speed at which events are moving in the Middle East.

“My understanding is there will be [a briefing] by early next week, but I don’t know where we’re going to be by early next week. I hope I’m wrong, we could be full blown into this thing. It’s a much more urgent situation than I think is being reflected. I’m surprised there isn’t more talk about it,” said Sen. Marco RubioMarco Antonio RubioHigh school student uses graduation cap to honor school shooting victims Rubio asks Barr to investigate Kerry over Iran meetings China promised to stop fentanyl traffickers, Congress must hold them to it MORE (R-Fla.), a member of the Senate Intelligence Committee.

“I’ve been here eight years, this is by far the single most imminent potential conflict of this significance,” Rubio added. “I pray that it changes. I don’t want us to have a war in that region. I hope it doesn’t happen that way, but we have to respond if attacked.”

Democrats say they have not been kept adequately informed.

“You can’t make foreign policy and national security decisions while flying in the blind. And right now because of the administration’s unwillingness to come and brief members of the Senate, particularly to the committees of national security of which Foreign Relations is one, that’s what we’re doing — flying in the blind,” said Sen. Bob MenendezRobert (Bob) MenendezWe can accelerate a cure for Alzheimer’s The Hill’s 12:30 Report: Manafort sentenced to total of 7.5 years in prison Acting Defense chief calls Graham an ‘ally’ after tense exchange MORE (N.J.), the ranking Democrat on the Foreign Relations Committee.

Sen. Richard Blumenthal (D-Conn.) said “the American people need to be told why the administration is moving an aircraft carrier group, bombers and other assets into harm’s way” and warned of a repeat of the military buildup that led to the 2003 invasion of Iraq.

“There’s a saying that history doesn’t repeat, but it rhymes. The talk about secret information concerning Iran’s aggressive while refusing to give us information certainly smacks of Iraq,” he added.

Schumer also drew a comparison to Iraq on the Senate floor.

“The lessons of history teach us that when things are done in secret, behind closed doors, mistakes can be made and momentum built for a course of action that the nation ultimately regrets,” he said.