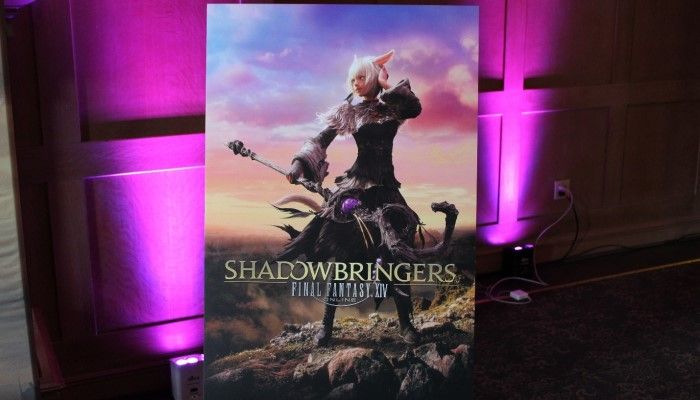 With Shadowbringers’ launch looming ever closer, Square Enix has pulled out all the stops with its press viewings of the game. I was one of the lucky few invited out to be one of the first to play the expansion.  To say I wasn’t overwhelmed would be a lie, the shear amount of content available was substantial.  A lot of changes are coming, and I won’t be covering them all.  I just ask that you consider the content I do cover as a work in progress, this was a test build we played, not a final product.  Sadly, a lot of this information has already leaked, so this won’t be entirely new to you.

Naoki Yoshida kicked off the event in San Francisco with a nice presentation.  Much of the information pertained to the Live Letter we all received recently.  With a few tidbits of extra information given strictly for our gameplay and press releases. Basically, you saw what we saw.  After his presentation he opened the flood gates, allowing us unlimited access to the game to play to our hearts content.  We were given the entirety of the Crystarium, Lakeland, and II Mheg to play in, granted no quests involved.  We were also given a single dungeon to run through, Dohn Mheg, which we could utilize the Trust system, or the three other journalists at our pod, to complete.

As there is just so much content to cover, I’m going to touch on a few areas of interest.  I had a lot of people ask me about the Dancer, and White Mages, or healers in general, so I really focused on Dancer primarily, however, I did play Gunbreaker, Machinist, White Mage, and the Astralogian as well. I utilized the Trust system significantly, as well as the new FATE system to check out the changes.

One feature that has me very excited is the Trust System.  Built to help you quickly go through MSQ dungeons without having to wait on queues or other players.  It brings a singleplayer feel to the game, but not in a bad way. The system utilizes AI to play whatever roles are required, so if you chose a Tank, the AI would play DPS and Healer to assist you. The major issue with this system is the pure limitation of AI. They’re not human, thus react based on the scripts they are programmed to follow.  This can make for some wonky gameplay at times, as the AI tend to react to boss fights a lot differently than a real player would.  They aren’t meant to be as efficient as a player, and this is intentional. When asked about this, Yoshida-san stated that it is intentional that the AI will not be as efficient as a player.  This is to give an incentive to continue playing with other players.  Of course, efficient players will work through these dungeons a lot more efficient and therefore quicker than the AI can. One rather interesting bit of info he shared with me was that the AI are programmed for each of the MSQ dungeons in Shadowbringers.  They aren’t just generically programmed AI, they are tuned specifically for each encounter from the MSQ dungeons.  It appears a lot of effort and work went into making this system, and I for one welcome it!

Hopping into the first job I’m covering, I’m not going to go over skills and abilities.  I think it’s fair to say most of these have been leaked already and let’s just say the leaks are correct as of our playtest. Therefore, I’m simply going to go over how the jobs felt and played, giving my opinion of them as best I can.

The first thing I did when I got into the playtest was load up the Dancer.  I can honestly say this is the job I’ve been most excited for so far, and I wasn’t disappointed. The only concern I have is that the job will be significantly more RNG than I’m used to. A lot of the abilities are locked behind combo moves, which are generated from your primary attack abilities at a 50% chance. That 50% isn’t generous, however, and often I found myself going long spurts of time with no combo chains at all. I’m sure this will be changed or fixed for the better, but that’s my only true concern at this time with the Dancer.  Don’t expect to be a solo player with this job, the dances utilize other players to pull out the full potential of the Dancer.

The abilities are flashy, and rather satisfying. I had no problem killing any mobs I came across, granted I had no idea how to truly play the job. Overall, it’s just fluid gameplay. Do I think everyone will be a Dancer?  Possibly, but just because people play the Dancer, doesn’t mean they’ll master the Dancer.  There’s a lot going on with this job, but I could say that with many of the changes for other jobs as well, so who knows.

After playing around with Dancer for a bit, I decided it was time to check out Gunbreaker. Let it be known, I am not a tank.  I have never tanked in FFXIV, and never plan to, just not my style.  I’m going to be brutally honest here, I expected more.  Gunbreaker, to me, seemed to be extremely lackluster compared to the hype behind the job.  It’s a good tank, don’t get me wrong, but the abilities just aren’t as flashy and spectacular as I felt they should have been.  This could be bias on my part, truly, but compared to other tanks I just feel it’s a gimmick more than anything.  While it’s not my cup of tea, I can see players enjoying the job very much. It’s smooth, and easy to maintain.  You’re not overwhelmed with a bunch of abilities that seem useless, and threat generation is awesome with the new changes to enmity and tanks.  Allowing every ability to generate enmity is a game changer, and a huge quality of life buff for all tanks across the board.

I’ve never been a fan of Machinist.  Watching friends play it I was just underwhelmed with it. When the presentation brought up changes to Machinist, the first thing everyone noted, and rejoiced at, was the addition of a Mech-like summon ability. Yet at the time we didn’t realize just how different it was going to be, we thought it was simply a new ability.  It was exciting, until Yoshida-san told us that the entire job was reworked from the ground up. That excitement went through the roof. A lot of people weren’t happy with Machinist for obvious reasons, and Yoshida-san wasn’t turning a blind eye to those issues. Being re-worked from the ground up, it takes full potential over the new charged ability system, which allows certain abilities to continue to cooldown and stack charges to be unleashed as you please.

Because I’ve never played Machinist myself, it’s hard to truly judge just how much better it is. However, I can say that I am extremely happy with the Machinist as of the playtest. It was thoroughly enjoyable to play. Unfortunately, the dungeon scaled us down, so we couldn’t use the mech, but that’s okay because the entire job is just fun. The charged ability system is showcased very well with the Machinist.  The Machinist has two chargeable abilities, Ricochet, and Gauss Round.  The cool part about this is once you use your Hypercharge, the ability that causes Overheat, it allows you to utilize Heat Blast, which reduces the cooldown time on both Gauss Round and Ricochet by 15 seconds. With a 1.5 second recast time, this means you can indefinitely recharge both Gauss Round and Ricochet as much and often as you want, allowing you to basically spam both of those abilities at the cost of a mere 50 heat energy. Could this be abused, maybe a little OP?  Time will tell, but I didn’t see a significant increase in DPS from this, it felt more like filler to me.  Still a nice addition to the already substantially more awesome Machinist!

Healers have been a big debate recently.  We all know White Mage has been in a pretty bad position for a long time now.  With AST and SCH providing not only more healing output, but also more benefit to the party, there was really no reason to bring the WHM unless you simply enjoyed the job.  Fortunately for WHM, and Unfortunately for SCH and AST, big changes have occurred.

I played a little White Mage, but without having a live build with other players, it’s hard to truly gauge just how much improvement the job received.  It felt better, felt more fluid and more potent. The job received a new instant heal ability in an attempt to close the gap with the other two healers, WHM had to stand totally still prior to this, with no instant heals available.  This should boost the healing done significantly in fights where the healers are constantly on the move. Scholars, who relied largely on pet actions will also receive a new healing ability. The change I’m not too happy with is the AST card system. AST has been a buff support healer.  Giving out buffs to various players, and MP/TP regen to others. With this change, all buffs are now completely gone.  In their place is a very simple 3% and 6% damage buff.  You have 4 cards, 2 provide 3% to ranged, and 6% to melee, and 2 provide 6% to ranged, and 3% to melee. You can no longer bank cards into your spread to save them for later, and no more spreading the cards in an AOE. It’s a big nerf to the AST job, I just hope the new ability that merges both Nocturnal Sect and Diurnal Sect together makes up for the change.  Regardless, WHM appears to be in a much better place now, but until it’s used on the live servers we simply can’t tell. What I can tell you is that I asked Yoshida-san if he was happy with the changes made to WHM, his answer was very much so!

A change some players will likely not like is the entire Job Synergy system.  Yoshida-san wanted to remove the rigid requirement of bringing certain jobs over others just for the synergy it brought to the party.  As such, these synergies between jobs have been reduced, along with a revisit of job actions to ensure this end.

The world is gorgeous, the design of the Crystarium, Lakeland, II Mheg, and the dungeon Dohn Mheg was simply spectacular. The soundtrack was equally as great, but there’s not much to say regarding the maps themselves, unfortunately we had no quests to partake in, but we were able to utilize the new FATE system within the field maps. I’m excited to see the maps filled with live after launch.

Given the limitations of the press event build, it’s hard to truly tell just how awesome the expansion will be. The thing about MMORPG’s is the players give life to the game. When you’re by yourself in a barren world, it’s just not the same.  The game was enjoyable, the new jobs were awesome, and the graphics and soundtrack were simply beautiful. There’s a lot of changes to take in, and when the expansion launches, a lot of content to chew through.  If this event showed me anything, it’s I can’t wait until the expansion goes live!  I can honestly say that this has been the expansion I’ve been the most excited for.  I don’t think we’ll be disappointed!

Unfortunately, my interview wasn’t very long, and the answers we received took up a majority of our time.  We’ll have another post outlining a full, proper interview from the London event posted by Gazimoff, make sure you check it out!