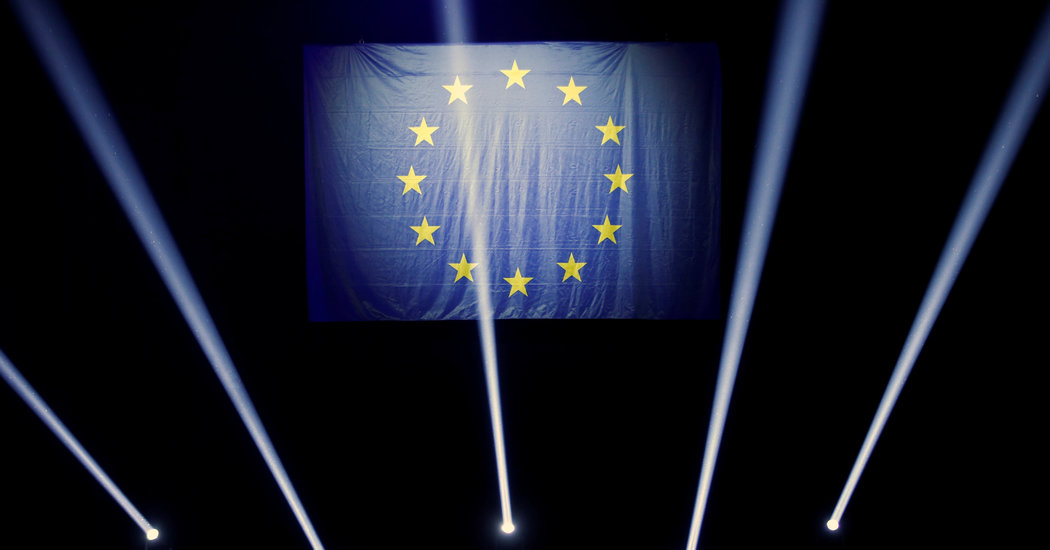 BRUSSELS — It is the season of far-right photo ops in Europe.

At a Saturday rally in Milan, Italy’s populist firebrand, Matteo Salvini, preened with France’s far-right icon, Marine Le Pen. Days earlier, Ms. Le Pen was accused of making a white supremacist hand gesture in a selfie with an ultranationalist politician from Estonia. Before that, Mr. Salvini yucked it up with Prime Minister Viktor Orban of Hungary, Europe’s proud “illiberal democrat,’’ beside a barbed wire border fence erected to block migrants.

The messaging is anything but subtle: The far-right populists of the European Union are banding together for a frontal assault on the political establishment in this week’s elections for the European Parliament. The races are seen as the best barometer of just how angry and alienated Europe really is — and just how broadly populists of various stripes can break through after years of gaining political strength.

“For the first time, we’ll see meaningful populist representation at the European level,” said Mujtaba Rahman, managing director for Europe for the Eurasia Group, “so there is at least a risk of a populist insurgency trying to take over or paralyze institutions from within, with implications for Europe’s capacity to act.”

Populists are not expected to win the biggest number of the Parliament’s 751 seats, let alone a majority. The flurry of campaign photo ops may also prove to be misleading: Egos and differing agendas could interfere once it comes time for the various populist parties to create legislative coalitions and act with discipline. Still, analysts predict a major electoral breakthrough that is certain to disrupt European politics.

The recent scandal in Austria, which forced the resignation of the far-right Freedom Party vice chancellor and the collapse of the government on Saturday, may also damage the populist surge, reminding voters of how close many of these parties are to Russia.

And for now, the vote has set up a stark contrast: Even as the populists are playing to anger and nationalism, mainstream leaders are trying to sell their apathetic voters on maintaining the course. President Emmanuel Macron of France, who embodies the pro-Europe establishment, argues that “more Europe” is needed, not less.

“This election is between the builders and the breakers,” said Marietje Schaake, a liberal Dutch legislator. “Will people come out to vote because they know what’s at stake?”

The European Union is a colossus, a federation of 28 nations (including Brexit-paralyzed Britain) that constitutes the world’s biggest single market and has more than 500 million citizens. But it is still a political work in progress, led by national leaders working as a collective, with a large, rivalrous and unelected executive branch in Brussels. The elections every five years for the European Parliament are considered the truest test of public attitudes toward the bloc.

European politics have been fragmenting since the financial crisis of 2008, and populist anger deepened after an influx of migrants from Africa and the Middle East, reviving some of the Continent’s oldest and ugliest impulses. Anti-Semitism is rising. Anti-elite and anti-immigrant sentiments remain acute. Nationalist and identitarian movements are gaining clout, while once marginalized neo-fascist parties have become more vocal.

Yet if the populists once vowed to shatter the European Union, they have softened their agenda to match public attitudes. Polls in member states, minus Britain, show that voters, if unhappy with their current circumstances, want to change the bloc rather than destroy it, which is why leaders like Mr. Salvini and Ms. Le Pen talk about altering the European Union from within.

Invoking hot-button issues like migration, terrorism and Islamophobia, far-right and far-left populists place blame on remote bureaucrats in Brussels and call for devolving more power to national governments. They hope the election will both gum up Brussels and give them extra leverage in domestic politics, which is what many of them care most about.

On the campaign trail, the populists have dominated news media attention. Mr. Salvini, Italy’s powerful deputy prime minister, is campaigning so often that critics say he is almost never at work. A bevy of photographers documented his meeting with Mr. Orban along the Serbia-Hungary border, as the two men hoisted themselves up into a watchtower to stare across the empty frontier with binoculars — the way American officials like to stare at North Korea from Panmunjom.

“To defend the borders and the safety of our children,” Mr. Salvini tweeted, as he urged a vote for his party, the populist League.

Populists Ascendant, but Can They Get Along?

The question is whether voters are still animated by migration and the clash-of-civilizations rhetoric often used by Mr. Salvini and Mr. Orban. As important is whether the varied populists, assuming they win a sizable number of seats, can coalesce into a powerful coalition. That part is very doubtful.

On Saturday afternoon, Mr. Salvini held a large election rally in Milan for 11 international populists, most notably Geert Wilders of the Dutch Party for Freedom and Ms. Le Pen, who passed off the Austrian scandal as a domestic affair. In the rain, the crowd heard speakers bashing Europe, its leaders, migrants and Islam, and applauded Ms. Le Pen, who said, “We are living in a historic moment and you can tell your grandchildren, ‘I was there.’ ”

But she spoke in French, and many others spoke in English, causing one supporter to shout, “Enough with all this English! We want Italian!”

Mr. Salvini, clearly eager to appear as Europe’s top populist, called for a large turnout and said, “the choice of May 26 is between the future and the past.”

But if he hopes such a coalition can become the largest bloc in the Parliament, the prospects are dim, partly because of a clash of egos and agendas among different populist parties.

Opinion polls suggest that populist parties could win up to 180 seats in European Parliament, enough to create serious delays and difficulties in the next Parliament, in which the center-right and center-left are expected to lose their traditional majority. Ms. Schaake, the Dutch legislator, said that “the real story is fragmentation and what will happen in the center.” The populists will not agree on everything, she said.

“But they can make a mess.”

Even if they are replaced by others from the pro-European mainstream, countries led by euroskeptics, like Italy, Hungary and Poland, will get to nominate powerful commissioners, which could mean more squabbling at the top and a shift away from federalism.

The potential for polarization will reach into the Commission, too, said Daniela Schwarzer, director of the German Council on Foreign Relations. “Who will Orban and Salvini send as commissioners?” she asked. “And the scrutiny of candidates by Parliament will be tougher.” Parliament has the right to scrutinize commissioners and to endorse or reject the whole slate.

Voters, meanwhile, are unpredictable. Turnout is usually low in European races, which gives advantages to motivated, more narrowly focused populist parties. A study of the electorate by the European Council on Foreign Relations found Europe’s voters more volatile than polarized. Immigration, the main topic for many populists, ranked only third among European voter concerns, behind Islamic radicalism, much of it homegrown, and the national economy.

“Swathes of voters,” said Mark Leonard, the council’s director, “are moving fluidly between parties of the right and left.”

Indeed, if many voters are attracted to the populists, the study showed that many others are terrified of them, and the growing nationalist sentiment.

One main reason is the ongoing mess over Brexit. Britain was supposed to be out of the European Union at the end of March, long before these elections. But the shambolic impasse in Westminster has continued, forcing Britons to participate in elections for a European Parliament that three years ago they voted to leave.

Brexit, however, has cut both ways. While it has shown euroskeptics how difficult and costly it is to leave the bloc, British participation in these elections is benefiting the euroskeptics and the populists. The main winner so far is the beer-swilling English nationalist, Nigel Farage, whose new Brexit Party is making huge gains at the expense of both mainstream parties, the Conservatives and Labour.

For as long as Britain remains inside the European Union — at least until the latest extension of Halloween it seems — Mr. Farage’s party will swell the ranks and influence of populists in the European Parliament, where Britain has roughly 10 percent of the seats, while Labour members will aid the Socialist bloc.

With Prime Minister Theresa May on her way out, Britain could then be led by a fervent Brexiter like Boris Johnson, who would only make mainstream Europeans more anxious about the future — including the next seven-year budget. It may even make a “no-deal Brexit” more attractive to Brussels — even if a majority in the British Parliament does not want one.