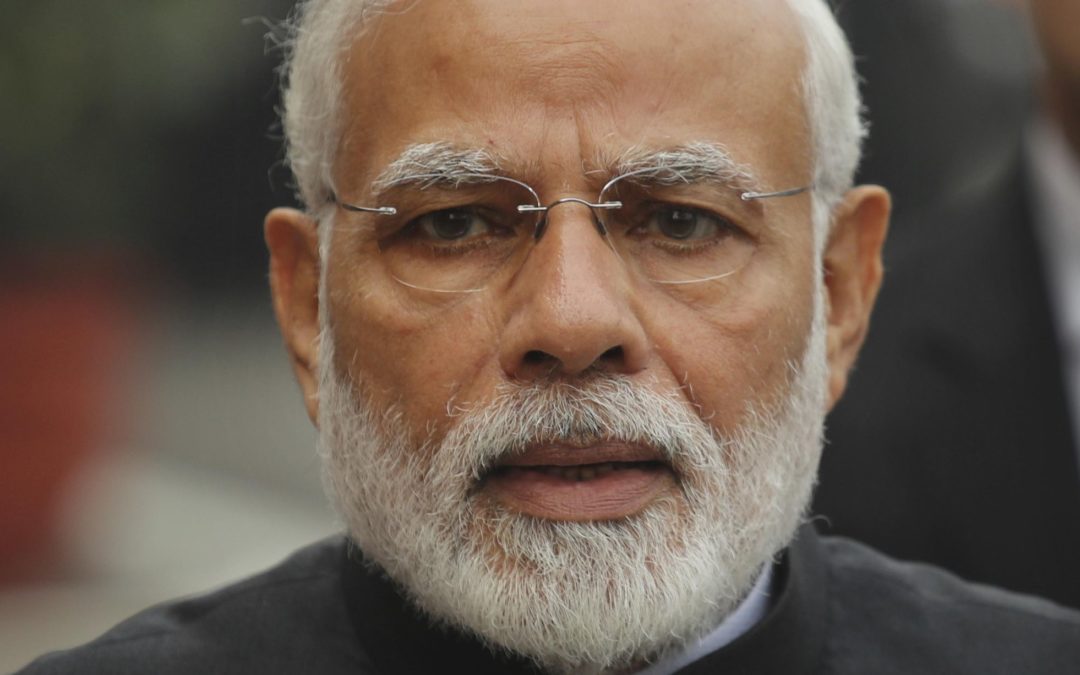 New Delhi — President Trump’s brinkmanship on Iranian oil has sucker-punched India, which is dealing with the potential cutoff of a primary energy supplier in the middle of a national election and a low-intensity trade war.

The emerging Asian giant now finds itself in a crossfire between two of its allies, the U.S. and Iran, with few options because of its strategic dependence on Washington and much to lose whichever side it takes.

The Trump administration’s imposition of harsh sanctions on Iranian crude exports went into effect in November but were waived for eight countries, including India, China, Turkey and Japan. On April 22, Washington announced that the waivers would be revoked effective May 1.

The government of Prime Minister Narendra Modi reportedly appealed to Washington for an extension until after India’s lengthy national elections end this month and a new government is formed in New Delhi, but the appeal fell on deaf ears. Petroleum and Natural Gas Minister Dharmendra Pradhan insisted in a tweet that “a robust plan” was in place to ensure “additional supplies from other major oil-producing countries.”

But losing exports from Iran, which was its third-largest crude supplier after Iraq and Saudi Arabia, comes as a hard knock to India, which imports more than 80% of the oil it needs. It has also fueled a national debate over a response to Mr. Trump’s confrontational policy while India tries to cultivate deeper economic ties with Iran.

The ambivalence within the Indian establishment was underscored this week as Iranian Foreign Minister Javad Zarif visited New Delhi for talks with top Indian officials — even as Tehran and Washington were trading charges of seeking to provoke a clash in the Middle East. Indian Foreign Minister Sushma Swaraj, keeping in mind his country’s commercial considerations, reportedly told Mr. Zarif that the decision on purchasing Iranian oil would be made after the elections.

Though no official statement was made to this effect, any such assurance by the Indian foreign minister would appear to directly contradict Mr. Pradhan and other Modi aides, who say India has acquiesced to the U.S. directive to steer clear of Iranian oil.

Mr. Zarif said that “the two sides have designed a special financial system to augment trade and economic cooperation.” Again, India made no formal announcement suggesting plans to ensure supplies from Tehran.

The cutoff of Iranian oil imports, just as crude prices have begun to spike, will hit particularly hard because Iranian oil is relatively less expensive as a result of longer credit and cheaper freight. India is Iran’s second-biggest customer.

More than the economic jolt is the political implication of the sanctions fight that troubles Yashwant Sinha, who was India’s finance and foreign minster from 1998 to 2004. Mr. Sinha recently quit as a senior leader of the ruling Bharatiya Janata Party to protest Mr. Modi’s governing style.

He expresses a popular view that India should stand up for its national interests and not accept dictation from Washington.

“India is not bound by law to accept the unilateral U.S. sanctions on Iran, yet we chose to surrender to the U.S.,” Mr. Sinha said in an interview. “We have lost the battle for strategic independence.”

It’s not just about oil supplies.

India has been investing heavily in Iran’s efforts to develop the strategic Chabahar Port on the Gulf of Oman, along with railway lines connecting the port directly to Afghanistan. The port is a keystone of a plan to bypass archrival and Sunni-dominated Pakistan, which now controls all major supply routes to landlocked Afghanistan.

This monopoly, which Chabahar is meant to break, has traditionally given Pakistan an outsized leverage over Afghanistan and global players engaging with the country.

The Trump administration appears to have recognized the port’s larger strategic role. “Chabahar Port is not covered by U.S. sanctions — given its role in enabling the Afghan economy,” said Amit Bhandari, a fellow at the Indian foreign policy think tank Gateway House. Stability in Afghanistan, central to the U.S. plans to withdraw from the war-ravaged nation, is also a major Indian policy objective for ensuring peace in its neighborhood.

Chabahar is strategically located on the Strait of Hormuz, through which two-thirds of the world’s maritime oil trade passes. Touted as India’s strategic counter to China, the Chabahar Port is about 40 miles from Pakistan’s rival Gwadar Port, which is being developed with heavy investment from China and its Belt and Road initiative.

India took over Chabahar operations in January, its first time running a foreign port. Apart from the strategic access to Afghanistan, India has been looking to Chabahar as a trading gateway to Central Asia and eastern Russia.

“We should have explained to the U.S. how high our stakes are in Chabahar. And if they still wouldn’t understand, we should have just walked away,” said Mr. Sinha, who was India’s foreign minister at the time of the Iraq invasion in 2003 and resisted U.S. pressure to send troops and medical teams. “We are not a client state of the U.S.; there’s no need to behave like one.

“Iran is a longtime friend of India,” the former minister added. “In the past, they have forgiven us. I hope they will do so again.”

Mr. Bhandari, however, said the government can do little because no large Indian commercial enterprise can risk violating U.S. sanctions.

“To be locked out of the U.S. financial system is not a risk any commercial entity, even if government-controlled, can take,” he said.

As in Washington, Iran has long been a bone of contention in India’s domestic politics.

In 2005, 2006 and again in 2009, the Indian government voted for U.N. resolutions to censure Iran for its nuclear program. Each time, the government faced bitter domestic criticism for bowing to U.S. pressure.

The U.S. and India began to reverse decades of hostility since the collapse of the Soviet Union and cultivated each other as a hedge against a new, common threat: a rising China, with which India fought a war in 1962 and shares a disputed border. As China takes an increasingly assertive regional posture, New Delhi turns to Washington for support.

In the past five years, the Modi government has tightened its embrace of the U.S. with both the Obama and Trump administrations. India also has signed a joint strategic vision statement for the Asia-Pacific and the Indian Ocean region, much to China’s alarm, and a 10-year defense framework agreement.

In 2016, New Delhi and Washington signed a landmark defense logistics pact giving each side access to the other’s military facilities. In September, they signed a pact enabling the two sides to operate on the same communication systems and share real-time military intelligence.

The U.S. usually reserves such agreements for NATO partners and other close military allies such as South Korea and Japan. The strong tilt toward Washington sparked fears in China that India is ditching its traditionally neutral stance to side openly with the U.S.

Although strategic cooperation between India and the U.S. has increased, Mr. Trump’s unorthodox trade and foreign policy moves have sparked bilateral economic tensions. Away from the international media glare on the U.S.-China trade war, India has been quietly fighting its own trade war with the U.S., making it more difficult to stand up to Mr. Trump’s Iran sanctions.

Having become so dependent on the U.S. strategically and already under pressure from Mr. Trump to open its markets further, Indian officials say they see little option but to concede on Iran. In the middle of the election season, the government has even less authority to fight back.

The U.S. trade deficit with India has hovered around $20 billion in recent years, much smaller than the $300 billion it averages with China. But India, which Mr. Trump calls “a tariff king,” still ranks among the 16 “cheater” countries that the Trump administration has been investigating for “unfair practices” that give them a surplus in goods trade.

Mr. Trump’s repeated complaints over the high tariffs India imposes on Harley-Davidsons coerced New Delhi to cut duties on U.S. motorcycles last year. The president has also threatened to end the preferential treatment for many Indian products under the Generalized System of Preferences, which allows duty-free entry from developing countries.

India, in turn, threatens to impose tariffs on 29 U.S. products to retaliate against the steel and aluminum tariff hikes in March last year.

“India is already the world’s third-largest economy, yet it is only the U.S.’s 13th-largest export market due to overly restrictive market access barriers,” said Mr. Ross. He pointed out that the U.S., on the other hand, takes in about a fifth of India’s exports.

Lack of access to Iranian oil might help address Mr. Trump’s concerns over trade deficit if some of it is replaced by U.S. oil. S&P Global Platts Analytics expects India to keep increasing U.S. crude. Asia bought 45% of U.S. crude exports last year, up from 36% in 2017, with India accounting for 14% of the Asian exports.

“India has been much more forthcoming in importing U.S. shale since Trump came to office. But costs of refinery recalibration to process shale is a real issue, and it will take time to make a fuller switch,” said Sourabh Gupta, resident senior fellow at the Institute for China-America Studies in Washington.

Indian officials said they have prepared the country for the day Iranian oil supplies are cut off and have lined up alternate suppliers. But private analysts say any switch will come with a hefty price tag.

New Delhi announced last month that it would acquire additional supplies from elsewhere, but analysts say it won’t be able to fill the gap left by Iran.

“No one is going to give charity to India in the oil market,” PetroWatch Editor Madhu Nainan told the Agence France-Presse news agency this month. “Even Saudi Arabia has no plans to replace Iranian crude in the global market.”

The Washington Times welcomes your comments on Spot.im, our third-party provider. Please read our