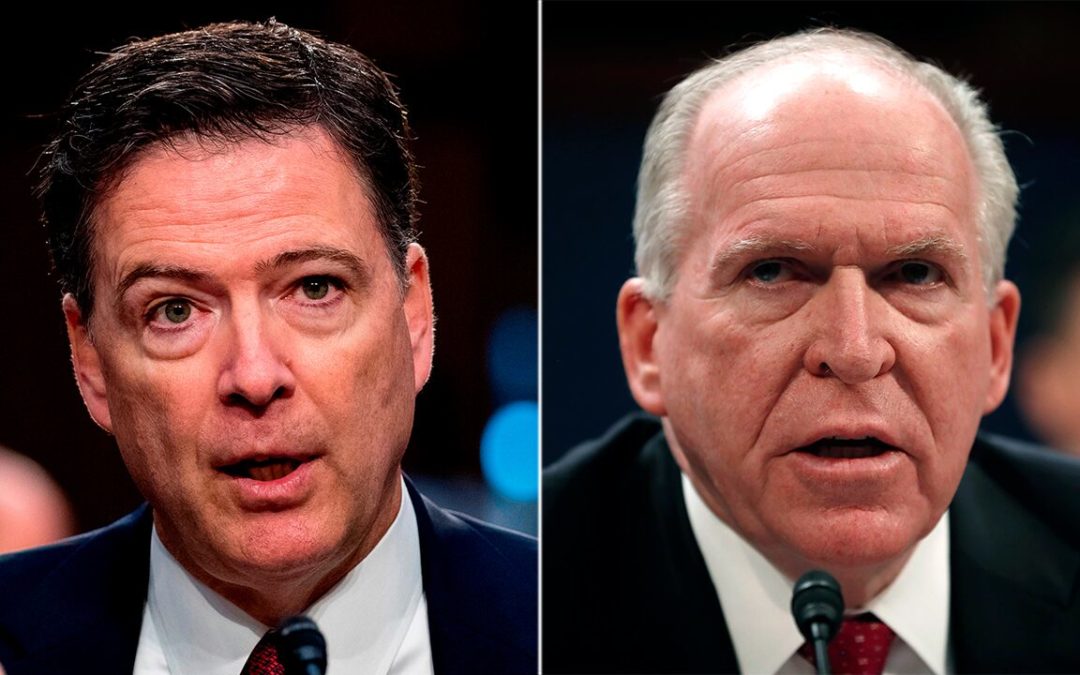 A high-level dispute over which senior government officials pushed the unverified Steele dossier amid efforts to surveil the Trump campaign has broken out into the open again, after it emerged that Attorney General William Barr appointed a U.S. attorney to examine the origins of the Russia investigation and determine if the FBI and DOJ’s actions were “lawful and appropriate.”

Fox News was told that the email chain – not yet public — referred to the dossier as “crown material,” but it was not clear why this apparent code was used. On Tuesday night, former GOP Rep. Trey Gowdy said on Fox News’ “The Story with Martha MacCallum” that “Comey has a better argument than Brennan, based on what I’ve seen.”

A day earlier, Gowdy told Fox News, “Whoever is looking into this, tell them to look into emails” from December 2016 involving Brennan and Comey. Gowdy, who is now a Fox News contributor, said his assessment was based on sensitive Russia records he reviewed as then-chairman of the Republican-led House Oversight Committee.

But in a statement to Fox News, a former CIA official put the blame squarely on Comey.

“Former Director Brennan, along with former [Director of National Intelligence] James Clapper, are the ones who opposed James Comey’s recommendation that the Steele Dossier be included in the intelligence report,” the official said.

Former CIA Director John Brennan pushed to include the Steele dossier in a classified intelligence assessment, sources tell Fox News — but that claim was disputed by an ex-CIA official.
(AP, File)

“They opposed this because the dossier was in no way used to develop the ICA,” the official continued. “The intelligence analysts didn’t include it when they were doing their work because it wasn’t corroborated intelligence, therefore it wasn’t used and it wasn’t included. Brennan and Clapper prevented it from being added into the official assessment. James Comey then decided on his own to brief Trump about the document.”

Fox News has reached out to Comey’s legal team twice, and provided the statement from the former CIA official, but did not receive a reply on the record.

In March, Republican Sen. Rand Paul leveled similar allegations on Twitter, citing a “high-level source” who said Brennan had “insisted that the unverified and fake Steele dossier” be included in the January 2017 ICA.

Clapper previously testified that the dossier was not ultimately used in the ICA. News that Comey had briefed Trump personally on the dossier before the inauguration — purportedly to warn him of potential blackmail threats — leaked within days and opened the door for media outlets to publicize the dossier’s lurid claims.

Whether the FBI acted appropriately in obtaining the Foreign Intelligence Surveillance Act (FISA) warrant to Trump campaign aide Carter Page is now the subject not only of U.S. Attorney John Durham’s new probe, but also the ongoing review by Justice Department Inspector General Michael Horowitz. U.S. Attorney for Utah John Huber has been conducting his own investigation separately, although details of his progress were unclear.

As one example, in its FISA application, the bureau repeatedly and incorrectly assured the court in a footnote that it “does not believe” British ex-spy Christopher Steele was the direct source for a Yahoo News article implicating Page in Russian collusion, and instead asserted that the Yahoo article provided an independent basis to believe Steele.

Steele has told a British court that he briefed multiple news organizations during the fall of 2016 — including Yahoo News.

Gowdy’s remarks echoed Republican Sen. Lindsey Graham, who told Fox News’ “Sunday Morning Futures” this past weekend that he was pushing to declassify documents that would expose the FBI’s poor efforts to corroborate the dossier.

“There’s a document that’s classified that I’m gonna try to get unclassified that takes the dossier — all the pages of it — and it has verification to one side,” Graham said. “There really is no verification, other than media reports that were generated by reporters that received the dossier.”

Graham cited a report from The Hill’s John Solomon that the FBI was told expressly that Steele, the bureau’s confidential informant, had admitted to a State Department contact he was “keen” to leak his discredited dossier for purposes of influencing the 2016 election.

Deputy Assistant Secretary of State Kathleen Kavalec’s written account of her meeting with Steele on Oct. 11, 2016, was sent to the FBI prior to the bureau’s FISA warrant application to monitor Page, according to records unearthed in a transparency lawsuit by Citizens United.