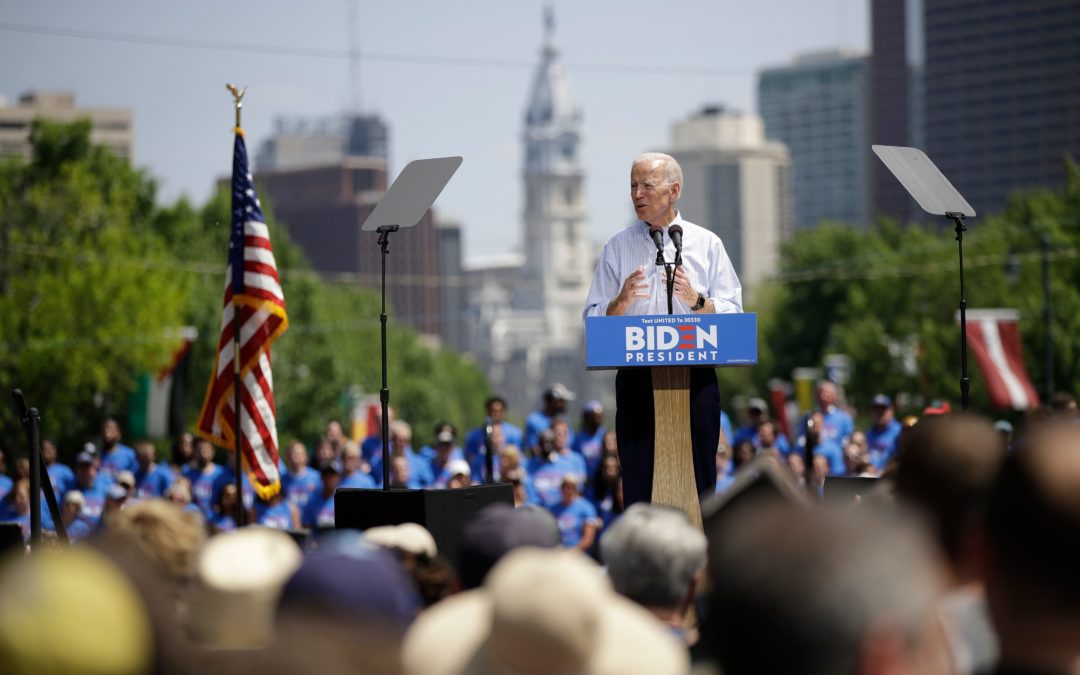 Former Vice President Joe Biden on Saturday launched his 2020 campaign with a rally that put unity and bipartisanship at its core, calling on the country to put aside “angry” politics — though he saved plenty of barbs for President Trump.

“Our politicians, politics today traffics in division and our president is the divider-in-chief, but he’s not the only one, far from it,” Biden said in his address in Philadelphia. “He’s just the worst practicioner of politics that singles out, scapegoats and demonizes.”

“Our politics has become so mean, so petty, so negative, so partisan, so angry and so unproductive,” he said. “Instead of debating our opponents we demonize them. Instead of questioning judgements, we question their motives. Instead of listening, we shout.”

In the speech, he made reference to the angrier rhetoric coming from his fellow primary rivals and distanced himself from it.

“Some of the smart folks say Democrats don’t want to hear about unity. They say Democrats are so angry that the angrier a candidate can be the better chance he or she has to to win the Democratic nomination,” he said. “Well, I don’t believe it. I really don’t, I believe Democrats want to unify this nation. That’s what our party’s always been about.”

The speech taps into the perception of Biden as a more centrist candidate, who supporters say can clinch vital swing states like Pennsylvania, Wisconsin and Michigan that went to Trump in 2016.

But he could face a difficult time in the primaries, with 22 other opponents so far and many of them pulling the party to the left on issues such as taxation, Medicare-for-all, impeaching President Trump and the Green New Deal.

He later said he was hoping to offer “a different path.”

“If the American people want a president to add to our division, to lead with a clenched fist, closed hand and a hard heart, to demonize your opponents and spew hatred — they don’t need me, they’ve got President Donald Trump” he said to boos.

But that more open stance toward some Republicans may be controversial among some in the party’s left-wing base. In February, Biden walked back his description of Vice President Mike Pence as a “decent guy” after criticism from “Sex and the City” actress and activist Cynthia Nixon called him out.

He was on safer territory with activists on Saturday when he hailed former President Barack Obama as “an extraordinary man” and spoke of Obama’s record on passing ObamaCare and the Recovery Act — items that Biden will likely tout in part as his credentials for running for office.

He also claimed that Trump inherited a good economy from an “Obama/Biden administration, just like he inherited everything else in his life” — a barb that drew some of the loudest applause in his speech.

Biden’s campaign relaunch comes as the former vice president has shot to the top of polls for the Democratic nomination, and his lead appears to be growing.

A Fox News Poll published Friday found that among Democratic primary voters, Biden’s 35 percent (up from 31 percent in March) leaves Sen. Bernie Sanders, I-Vt., in a distant second place with 17 percent (down from 23 percent). All other candidates are in single digits.

Biden also performs best in hypothetical 2020 matchups.  Among all registered voters, he leads Trump by 11 points (49-38 percent), up from a 7-point advantage in March. Biden’s is the only lead outside the margin of sampling error in the matchups tested — and he is the only Democrat to push Trump’s support below 41 percent.