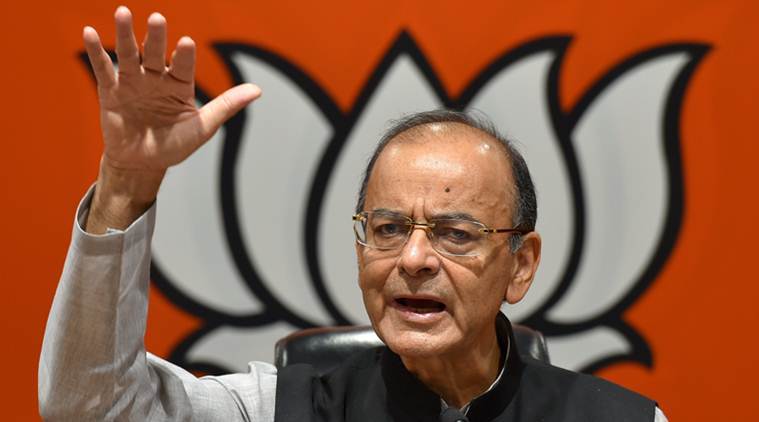 As a BJP delegation met Chief Election Commissioner Sunil Arora and demanded bar on campaigning by West Bengal Chief Minister Mamata Banerjee and deployment of more observers in the state following violence during a roadshow in Kolkata by party president Amit Shah, Union minister and senior BJP leader Arun Jaitley on Tuesday asked whether Bengal has “acquired a Government of Gangsters”.

Banerjee, who visited Vidyasagar College, the main site of violence, announced that her party will take out a protest rally on Wednesday to condemn the vandalism and destruction of Vidyasagar’s bust in the college.

After the BJP team met Arora on Tuesday night, the EC sought a report on the party’s allegations from its special observer in Bengal.

Jaitley tweeted, “Has Bengal acquired a Government of Gangsters? The attack on Amit Shah’s peaceful rally by TMC is deplorable. Is a free & fair Poll possible in Bengal? All eyes now on Election Commission…. Keep it up Amit Bhai. Only Modi Ji and you can do in Bengal what others failed to realise. Victory is now at an arm’s length distance.”

TMC leader Derek O’Brien, meanwhile, accused the BJP of bringing “outsiders” and stoking violence. He tweeted, “Desperate BJP goons from outside Bengal smash statue of Ishwar Chandra Vidyasagar inside the college. Violent mob of BJP ‘outsiders’ in presence of Pukeworthy Shah. How little you know about Bengal, its rich history, its culture. Bengal will never forgive for what you did today.”

Has Bengal acquired a Government of Gangsters? The attack on Amit Shah’s peaceful rally by the TMC is deplorable . Is a free & fair Poll possible in Bengal? All eyes are now on the Election Commission.

In Chandigarh, Haryana CM and BJP leader Manohar Lal Khattar blamed the TMC’s student activists for creating the trouble, PTI reported. He said it is for the EC to ensure free and fair polling, but indicated that options like President’s rule can be opted for at a later stage, depending on how the situation unfolds. He said, “People of West Bengal are wise, they are watching what they (TMC) are doing. If they cross the limits then other things can be considered — like President’s rule. But at the moment, priority is that the EC should look into this…”

Sitaram Yechury, general secretary of the CPI(M), the main opposition party in Bengal, posted on the microblogging site: “BJP-RSS think nothing of when they vandalise the historic Vidyasagar College, break Vidyasagar statue. This is their advocacy of India’s civilisational heritage? Attacking knowledge is central to getting their poisonous project going. Bengal will reject the destruction they offer.”

In Kolkata, CPI(M) state secretary and Leader of the Opposition in Assembly Surjya Kanta Mishra said in a statement: “The character of both TMC and BJP has come into the open through this. Both assembled miscreants who were outsiders. Both party workers provoked each other and pelted bricks and stones. Even (a) bust of Vidyasagar was destroyed. Both (parties) are trying to polarise voters.”

BJP national media in-charge and Rajya Sabha MP Anil Baluni said the party delegation made the EC aware about the entire episode and demanded a bar on Banerjee from campaigning in the elections.

The BJP also demanded that “miscreants” and “history-sheeters” present in constituencies that go to the polls on May 19 should be arrested and removed from these places. The BJP demanded that Central forces should carry out flag march in these constituencies.