How Biden ‘Wrestles With the Alligator’ 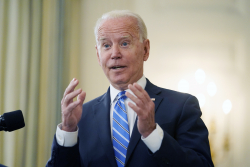 He’s banned from Twitter and Facebook, yet Donald Trump continues to be the dominant figure in Republican-and American-politics. Multiple times per day, his super PAC blasts out his pouty statements, a range of dictations that can be trivial or seemingly end a prospective GOP primary campaign. According to White House aides I’ve spoken with, the strategy from President Joe Biden on down remains the same: Don’t engage with Trump’s game. Don’t even say his name.
Read More Source: Real Clear Politics