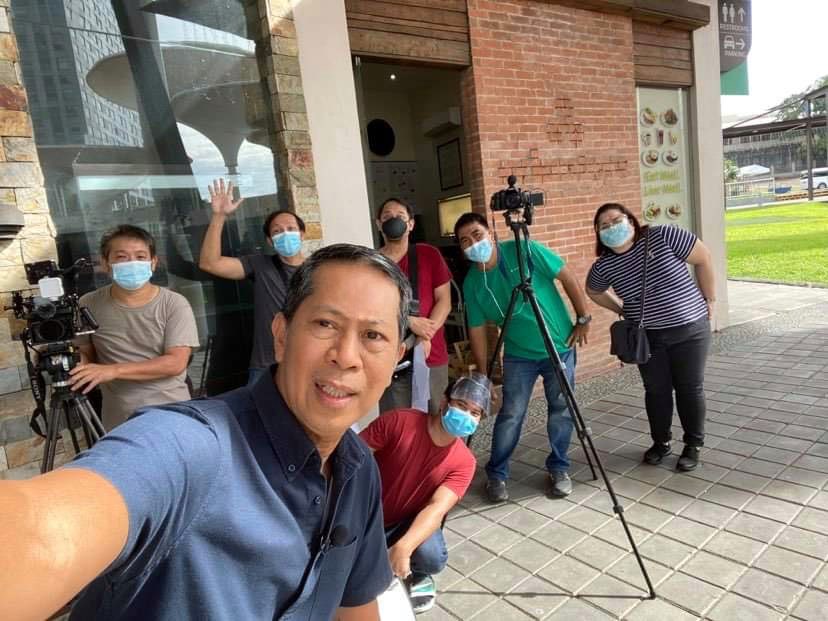 Mon Ilagan with crew in a recent shoot. Will the shoot be for TV or for politics?

Our roads first crossed back in the mid-1990s as young, promising news reporters of the Star Network, ABS-CBN.  I was covering the Malacanang beat, with then President Fidel V. Ramos, while Mon Ilagan was our eye in the Philippine Senate.  We were then both small players in the big league, but with big dreams.  When I decided to leave TV for the corporate world sometime in 1997, Mon stayed on with the station until he got part of his dreams fulfilled—getting the chance to host the morning show and even sometimes pinch-hitting in the late-night primetime newscast then known as “PULSO.” I was sincerely happy for him, having seen how he persisted on his uphill climb that started at the very bottom as a production assistant in Radio Veritas as early as 1981.  That’s hardwork that paid-off.

While enjoying a relatively successful ride on his TV career, he shocked the public when he left broadcasting in 2003.  That year saw him leap from his hard-earned win on-cam to a quick and surprise win in the world of politics.  He served as mayor of the Municipality of Cainta and completed three full terms with ease.  After relinquishing his post, he’s now back in broadcasting–somehow, doing radio work.  With the 2022 elections just a few months away, will he, once again, make a double dip into the second world, I now know, he equally loves?  Let’s ask Mon Ilagan 5 questions about his two great loves and then try figure out what he’s up to next.

1)    WHAT HAS SO FAR BEEN THE BIGGEST LESSON YOU LEARNED FROM THE MEDIA?

OBJECTIVITY. Kasi yun naman talaga yung character ko eh. Hear both sides of the story.  I don’t like being tainted with bias.  I still believe that as a journalist, we should only deliver the news as is, and not editorialize.   Disappointed ako pag nakakakita ako ng half baked news reports by young reporters now.  I wish younger reporters would further expound on the news items the feed the public with.

2)    WHO HAS BEEN THE MOST MEMORABLE PERSONALITY YOU MET IN THE COURSE OF YOUR MEDIA WORK?

Former President Gloria Macapagal-Arroyo. She’s very intelligent.  I covered her as a reporter.  She’s very hard to cover because she hated being asked shallow questions.  Whenever she gets them, the reporter would always get a blank, shallow face from her.  For a political figure, she was not as friendly with the media.

But I do admire her as a politician.  If you trace her political career, she started as DTI Secretary, moved on to become Vice President and DSWD Secretary; she rose to become President, was put on hospital arrest, but managed to come back as a Congresswoman.  After her supposed retirement, she, once again, bounced back as a Presidential Adviser.  This only shows how her immense wealth of knowledge and experience as a political figure.

3)    SINCE YOU LEFT MEDIA FOR POLITICS, WHAT IN TURN, IS THE GREATEST LESSON THAT YOU’VE LEARNED FROM POLITICS?

4)    WHO, TO YOU, WAS THE MOST MEMORABLE POLITICAL PERSONALITY THAT YOU GOT TO WORK WITH?

I’d say, Casimiro “Ito” Ynares, former Governor of Rizal.  He carries the long-serving political last name in the province of Rizal that is considered a political family, much worse, dynasty.  However, I don’t believe in political dynasties.   As long as politicians continue to serve their constituents and continue to create concrete and beneficial vision for the province, then they are still effective.  I chose Ito, specifically, because we share the same leadership styles – we love talking to people.  I can see sincerity.   Most of all, I can sense that he has the desire in continuously serving the best interest of the people of Rizal.

5)    IF YOU HAVE TO CHOOSE ONLY ONE BETWEEN BROADCASTING AND POLITICS, WHICH WOULD YOU LIKE TO DO IN THE REMAINING YEARS OF YOUR PROFESSIONAL LIFE?

I know that no one can serve two masters at the same time.  But I believe that broadcasting and politics are both forms of public service.  So let’s put it this way: I am seeing myself spending the rest of my life in doing public service. That’s all I can say for now.

Mon Ilagan is presently heard broadcasting over DWIZ 882 on the AM band, where he does the news IZ Balita Nationwide from 4-430pm; and hosts “Teka-Teka,” 430-530pm, daily.  He will also be making his TV comeback soon.  Abangan!
Read More