An Answer to Urban Violence: Take Politics Out of Policing 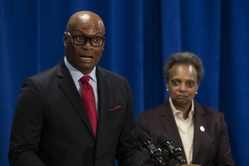 Eight-year-old Dejore Wilson was murdered in Chicago last week, shot in the back while riding in a car with her mother. Less than 24 hours later, Olga Calderon, a 32-year-old mother of two, was stabbed to death while stocking the shelves at a Walgreen’s drug store in Chicago’s Wicker Park neighborhood. Later that same week, a U.S. postal worker was shot in the head and in both her legs while on her usual rounds on Chicago’s South Side.
Read More