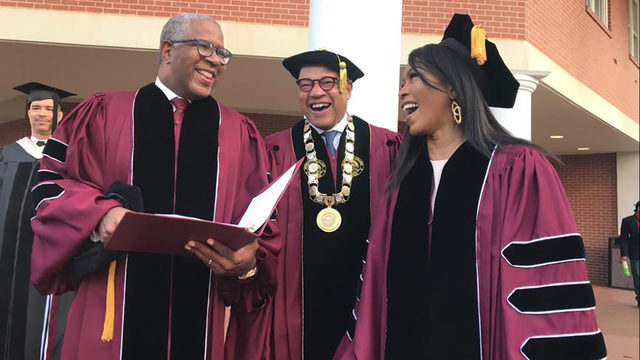 But during his remarks in front of the nearly 400 graduating seniors, the billionaire technology investor and philanthropist surprised some by announcing that his family was providing a grant to eliminate the student debt of the entire Class of 2019.

“This is my class,” he said, “and I know my class will pay this forward.”

The announcement elicited the biggest cheers of the morning.

TODAY AT 6 ON CHANNEL 2: We’re speaking with Morehouse president and students about their reaction to the generous donation.

“My family is going to create a grant to eliminate your student loans!” -Robert F. Smith told the graduating Class of 2019 @RFS_Vista #MorehouseGrad2019 pic.twitter.com/etG8JhVA46

Tonga Releford, whose son Charles Releford III is a member of the Class of 2019, estimates that his student loans are right at about $70,000.

“I feel like it’s Mother’s Day all over again,” she said.

The gift has been estimated at $40 million.

Tonga’s husband, Charles Releford III, is also a Morehouse graduate. He said their younger son, Colin, is a junior at Morehouse.

He doesn’t know who the keynote speaker will be at Colin’s graduation ceremony but is hoping for a return performance by Smith.

“Maybe he’ll come back next year.”