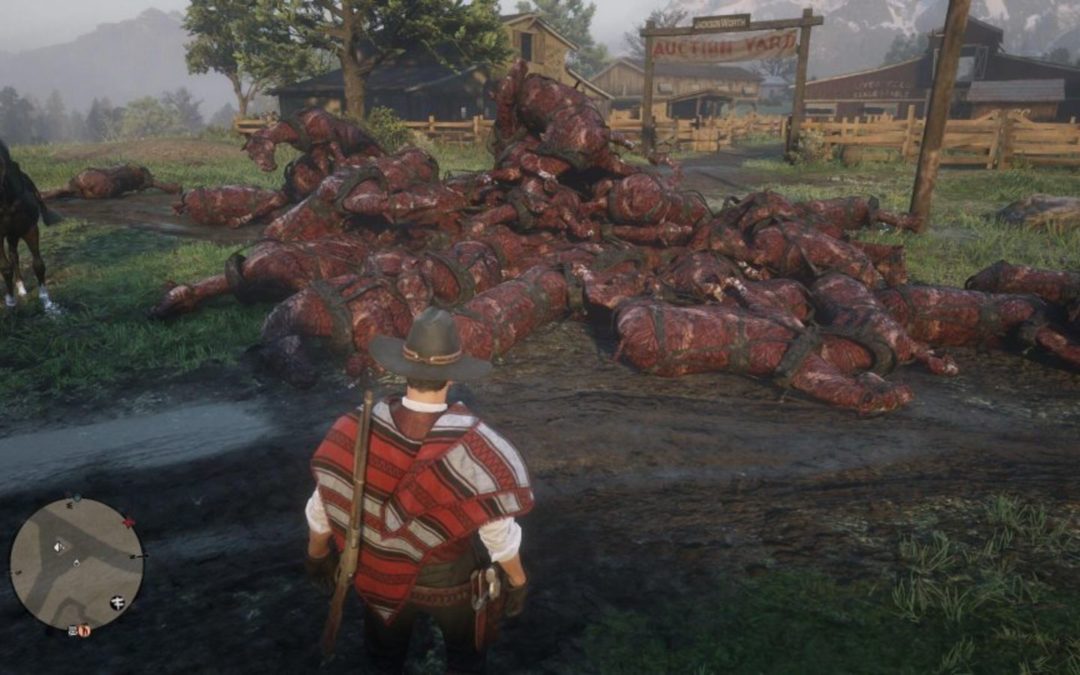 Red Dead Online players jumping into the game yesterday and today have discovered something terrible and strange: Piles of burned horse carcasses outside some towns, like Valentine. Many are surprised to find these piles and it seems to be the result of a newly discovered duplication bug.

The first reports of this disturbing bug popped up Saturday night and since then across Reddit and Twitter, players shared images and stories of the dead horse piles. Some players reported the glitch to Rockstar support’s Twitter account.

Another player was creeped out by how strange the pile behaved. “You can’t shoot the piles of burned rotten dead horses but if you shoot near them they make loud noises,” explained one Reddit user on PS4 in a post titled “What is this Lovecraftian shit.”

Players seem to believe the strange corpse pile was created by a newly discovered duplication bug, which allowed players to catch one large fish and then using a method involving their horse, clone that fish into their inventory. Some are reporting this bug might have been partially fixed via a hotfix or server-side update from Rockstar. A few players are pointing towards empty towns and a lack of NPCs spawning as a sign of a temporary fix by Rockstar. The idea is they are turning off spawns for animals and NPCs to stop players from abusing any dupe glitch.

But there is no confirmation that Rockstar Games has actually fixed or changed anything in Red Dead Online. I reached out to Rockstar and will update this post if I hear anything back.

While the bug seems to be more prevalent on PlayStation 4, some players are reporting dead horse piles on Xbox One as well.

The horses aren’t just creepy. They are actually causing performance issues as well, with many reporting framerate dips and frequent server disconnects. How much of this is tied directly to the dupe bug and dead horses is hard to say, but it does seem like RDO is less stable right now.

Something similar to this happened earlier this year after players used a dupe glitch to protest an RDO update they disliked.