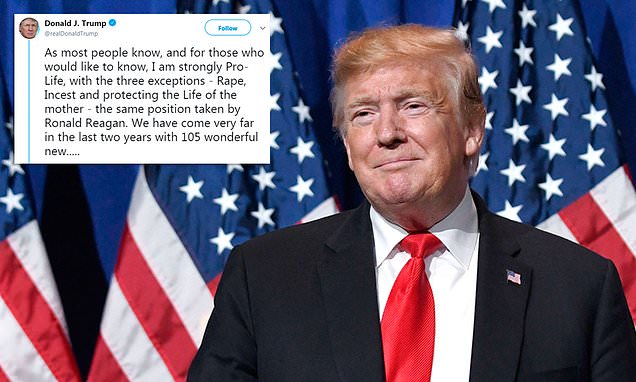 By Keith Griffith For Dailymail.com

President Donald Trump has broken his silence about Alabama’s controversial new law imposing a near-total ban on abortions, saying he is pro-life but believes there should be exceptions in cases of rape or incest.

‘As most people know, and for those who would like to know, I am strongly Pro-Life, with the three exceptions – Rape, Incest and protecting the Life of the mother – the same position taken by Ronald Reagan,’ Trump tweeted late on Saturday from the White House.

He continued: ‘We have come very far in the last two years with 105 wonderful new Federal Judges (many more to come), two great new Supreme Court Justices, the Mexico City Policy, and a whole new & positive attitude about the Right to Life.’

‘The Radical Left, with late term abortion (and worse), is imploding on this issue. We must stick together and Win for Life in 2020,’ Trump continued.

‘If we are foolish and do not stay UNITED as one, all of our hard fought gains for Life can, and will, rapidly disappear!’ he wrote.

It marks the first time that Trump has weighed in on Alabama’s law, passed this week, which would ban abortion in all cases except with the mother’s health is threatened.

The law, set to take effect in six months, does not penalize women who receive abortions, but would threaten doctors who perform them with up to 99 years in prison.

All are hoping that court challenges will make their way to the Supreme Court, and that the judiciary will overturn Roe v Wade, the 1973 high court ruling that declared abortion a Constitutional right as long as the fetus is not viable.

Jim Snively, of Huntsville, waves to passing cars while holding an anti-abortion sign in front of the Alabama Women’s Wellness Center on May 17

Trump is not the only prominent anti-abortion voice to speak out saying that Alabama lawmakers went too far.

Christian televangelist Pat Robertson, a staunch abortion opponent, called the Alabama law ‘extreme’, saying he feared that it would not create a good test case to overturn Roe v Wade in the Supreme Court.

During the 2016 campaign, Trump secured the evangelical vote that had been initially hesitant to cast ballots for the bombastic, twice-divorced billionaire by promising to appoint anti-abortion justices at the highest court in the land.

His stated position on abortion two decades ago was that he was pro-choice.

‘I’m very pro-choice,’ Trump said in an interview with Tim Russert in 1999. ‘I hate the concept of abortion. I hate it. I hate everything it stands for. I cringe when I listen to people debating the subject. But you still — I just believe in choice.’

By 2011, however, Trump said that he had changed his position and was opposed to abortion.

During the 2016 campaign, he explained in an interview that his position had changed after he had a heartfelt conversation with a friend who had contemplated abortion.