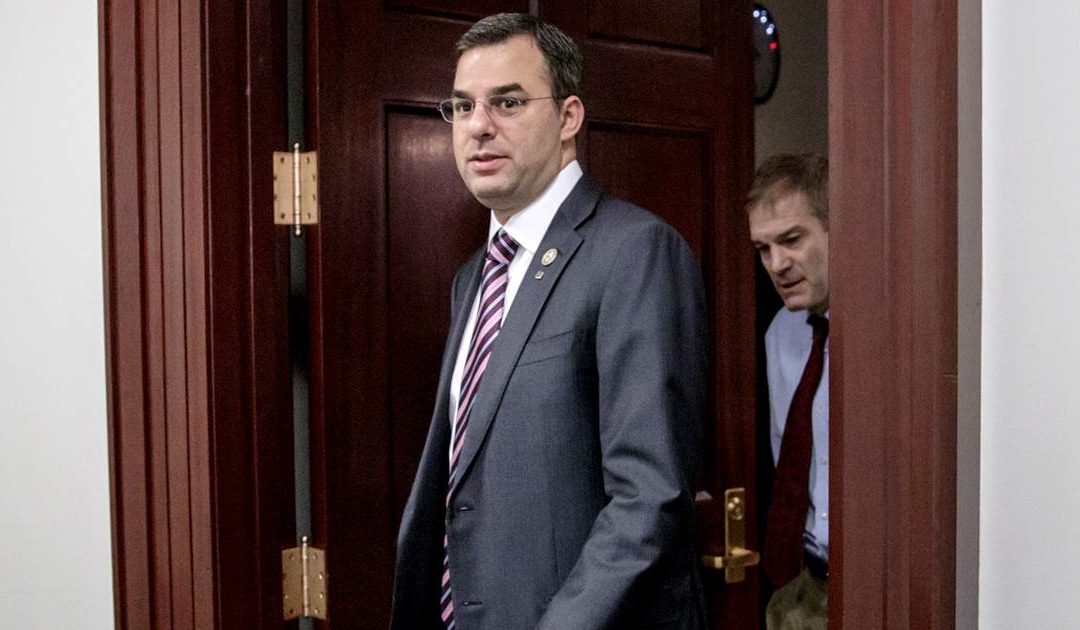 President Donald Trump branded Rep. Justin Amash, R-Mich., a “loser” on Sunday after he became the first GOP member of Congress to publicly assert the president engaged in “impeachable conduct.”

“Never a fan of @justinamash, a total lightweight who opposes me and some of our great Republican ideas and policies just for the sake of getting his name out there through controversy,” Trump wrote in the first of two tweets aimed at Amash on Sunday. “If he actually read the biased Mueller Report, ‘composed’ by 18 Angry Dems who hated Trump, he would see that it was nevertheless strong on NO COLLUSION and, ultimately, NO OBSTRUCTION.”

“Anyway, how do you Obstruct when there is no crime and, in fact, the crimes were committed by the other side?” Trump continued. “Justin is a loser who sadly plays right into our opponents hands!”

Amash garnered attention on Saturday for noting that Trump’s conduct was impeachable. In a series of tweets, Amash said he reached that conclusion after reading the entirety of special counsel Robert Mueller’s redacted 400-plus page report on Russian interference in the 2016 election, whether the Trump campaign conspired with Russian officials, and if the president sought to obstruct the investigation.

“President Trump has engaged in impeachable conduct,” he tweeted, adding that Attorney General William Barr “deliberately misrepresented Mueller’s report” in the four-page summary he sent to Congress in March, weeks before the redacted report was released.

Barr concluded that the report showed no collusion between Trump’s campaign and Russia, and said the evidence did not warrant bringing forth obstruction charges against the president.

Amash tweeted, “Contrary to Barr’s portrayal, Mueller’s report reveals that President Trump engaged in specific actions and a pattern of behavior that meet the threshold for impeachment.”

“In fact,” he said, “Mueller’s report identifies multiple examples of conduct satisfying all the elements of obstruction of justice, and undoubtedly any person who is not the president of the United States would be indicted based on such evidence.”

“The only people still fixated on the Russia collusion hoax are political foes of President Trump hoping to defeat him in 2020 by any desperate means possible,” she said.

On CNN’s “State of the Union” Sunday, Sen. Mitt Romney, R-Utah, said Amash’s impeachment call was “a courageous statement,” adding however that he did not believe impeachment was necessitated by Mueller’s report.

“My own view is that Justin Amash has reached a different conclusion than I have,” he said, adding, “I respect him. I think it’s a courageous statement. But I believe that to make a case for obstruction of justice, you just don’t have the elements that are evidenced in this document.”

Democrats, meanwhile, praised Amash for his stance. Julian Castro, former Housing and Urban Development secretary and a 2020 Democratic presidential candidate, tweeted: “When even a member of his own party is calling for the President’s impeachment, shouldn’t that tell you something?”

“Trump should be impeached,” he added,

Amash has clashed with Trump at various points during his presidency. The libertarian lawmaker voted with a Democratic majority in February to overturn the president’s declaration of a national emergency at the U.S.-Mexico border, an effort that ultimately failed.

Allan Smith is a political reporter for NBC News.