‘Game of Thrones’: 8 Questions the Series Finale Must Answer – The New York Times 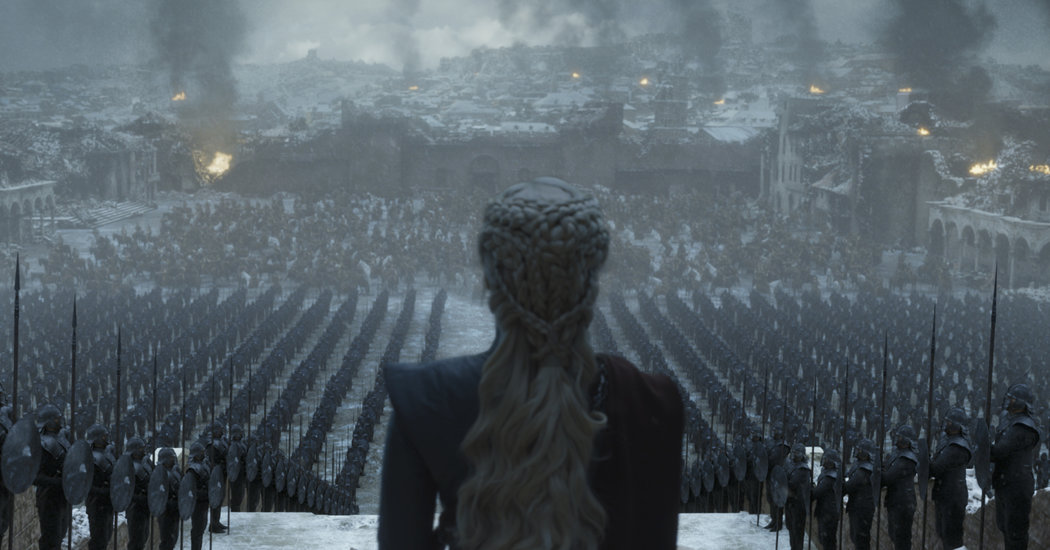 With only one episode remaining, it’s unlikely “Game of Thrones” will tie up every loose end for us.

But doesn’t the show owe us some degree of resolution to its major mysteries, and a judgment on the new villain its onetime hero has suddenly turned out to be?

[Read our ultimate guide to “Game of Thrones.” | Sign up for our Watching newsletter for film and TV recommendations.]

This is a tall order for one episode, but here are some things we really want to know:

What’s going on in Daenerys’s head?

There are so many theories about why Dany “snapped” and scorched King’s Landing.

People in Westeros might say it was because of a Targaryen predisposition toward mental illness (although most purported earlier examples had other explanations). The showrunners claim the havoc-wreaking was a spur-of-the-moment decision, but Dany actually telegraphed it in words and actions long before. Or maybe the cause was Varys’s poison, if it had the time to to take effect after all. (Basilisk blood, in the books, is easily hidden in cooked meat and produces violent madness.) Or it could be somehow connected to her ineffable, magical bond with Drogon?

Whatever the case, Dany now needs to provide us with an explanation — in words, not just unhinged facial expressions. Can she explain why the city’s surrender to her wasn’t enough to stay her hand? Does she realize that her picture will now be positioned in the Westerosi dictionary next to the word “overkill”? Is she too far gone to care? Someone (Tyrion? Jon? Grey Worm?) needs to talk to her about this.

Who can oppose her?

“Who’s lord of Storm’s End now?” Dany wondered during the post-battle feast at Winterfell, before she bestowed that title upon Gendry. This was a necessary honor: too long had power vacuums kept the various kingdoms in disarray. (We didn’t even know there was a new prince in Dorne until the last war-council meeting.)

So who is in control of what right now? Sansa Stark rules Winterfell, of course, in the absence of Jon Snow, the Warden of the North, making her the de facto leader of the North. Meanwhile, Sansa’s cousin, Robin Arryn, is not only Lord of the Eyrie but Defender of the Vale and Warden of the East (although Lord Royce has been the commander of Robin’s forces and generally acting on his behalf). Theoretically, Sansa’s uncle Edmure, as Lord Paramount of the Trident, could return the Riverlands to Tully control; his status is unclear, however — is he still being held prisoner by House Frey?

A legitimized Gendry Baratheon, now lord of Storm’s End, would rule the Stormlands, while The Reach would most likely be the preserve of House Tarly. Sam’s mother, Lady Melessa, might have been acting as Warden of the South after the deaths of Randyll and Dickon; if Sam heads back to Horn Hill, can he finally ascend to the lordship he had been denied? And what about Tyrion Lannister — might he not also still want to claim Casterly Rock as his birthright, and with it, the title of Warden of the West? And finally, Yara Greyjoy should have the Iron Islands under her command by now.

Before Dany destroyed King’s Landing, she should have been able to count most of these Houses as allies (save the Tarlys). We don’t know who Varys wrote to, or how many ravens he was able to send before his death — or if his “little bird” Martha knew to send them after. But if word spreads of Dany’s genocide and Jon Snow’s lineage, many of Dany’s alliances will crumble. The question is, would that make a difference? Even if the other regions are able to assemble fresh forces (and that would be difficult for those who just fought alongside Jon Snow), it might not be enough. One dragon can wipe out an army.

If Varys were smart — which he generally was — he would have also notified the Citadel, the Iron Bank, the House of Black and White, the Red Temple — any institution in Westeros and Essos with any sort of influence or power. Remember Varys’s riddle: Power resides where people believe it resides. There are effective ways to resist tyranny (and dragons). But if Dany is to be eliminated quickly, an assassin might be required. Someone she trusts, and who can get past the fearsome Drogon.

Will Arya change her face?

Arya Stark went to assassin school in Braavos, where she picked up some very useful skills. But she hasn’t utilized one of the most important ones in quite a while. Which is to say, where are all her faces? Did she bring any with her from Winterfell? How was she expecting to get past Cersei, her original target? And if she decides to select a new target, does she have spare faces to help out?

Will Tyrion face one last trial?

Twice in this series, Tyrion Lannister has been accused of crimes — murders and attempted murders — that he did not in fact commit. In attempting to defend himself against such charges, he usually resorted to trial by combat. But if Dany accuses him of treason — for freeing his brother Jaime, her prisoner — Tyrion actually would be guilty. How will he talk himself out of this one?

Will anyone break the wheel?

Dany promised to destroy the metaphorical wheel of power in order to create a better world. But she never said how she intended to do that. (Somebody should have asked.)

If she were to be defeated, will Jon pursue his claim or abdicate the throne? Will the throne be destroyed? (Hopefully Drogon will live long enough to melt it.) What about the idea of monarchy? What form of government could best replace the current one?

Will anyone suggest, as Tyrion once did, adopting the democratic methods of the Night’s Watch or the Iron Islands? Will anyone dig back in Westerosi history and suggest the re-establishment of a Great Council? Or how about glancing at the political setup in Essos, across the Narrow Sea? Or maybe something altogether new …

What do the common people think?

For all of the actions taken on behalf of the “common people,” it’s rare that the commoners themselves are consulted. Which leaves us to wonder: How much do they really know about what has happened? Do they even know who Daenerys Targaryen is? Did they consider Queen Cersei a tyrant?

These are people who once rioted in the streets (in Season 2) and ripped the High Septon limb from limb when they thought the monarchy was failing them. How do the survivors of the Sack of King’s Landing,— if there are any, feel about it now? (We can probably guess the answer to that one.)

How much did Bran know?

Did Bran Stark know about the blood bath in advance?

He has had troubling visions since Season 4, including Drogon cruising over a smoking King’s Landing and an ashy throne room (which matched Dany’s own vision from Season 2). Both Bran and Dany had glimpses of the future, but perhaps didn’t recognize what they were seeing at the time. (What turned out to be ash looked in these visions like snow.)

Unlike Dany, though, Bran has had a chance to pause and rewind. Did he watch more of the horror unfold? Did he recognize what Dany was going to do, and if so, why did he not share this information with anyone? Was it an ethical dilemma for him? (If so, we need to see him wrestle with that.) Also, could Bran actually intervene in the timeline? Or, remembering the repercussions with Hodor, would he choose not to meddle?

How could he justify remaining silent about a disaster that has claimed thousands of lives, while at the same time nudging Jon Snow into a position where he could claim the throne afterward? What is Bran’s agenda?

Do prophecy and magic even matter?

For that matter, what good is an ability to see into the future in this world? Melisandre’s visions, when she backed Stannis, also caused disasters — but they nudged Arya to kill the Night King as well.

Cersei’s downfall can in part be attributed to her obsession with Maggy the Frog’s fortunetelling (which turned out to be mostly accurate); if Cersei hadn’t perceived Margaery Tyrell to be the promised threat (instead of Dany), perhaps she wouldn’t have accumulated so many enemies.

Dany, too, obsessed about a witch’s words — she thought they meant she would never have children again. How much did that perhaps erroneous belief shape her path and enable her savior complex? The Prince/Princess Who Was Promised, the Stallion Who Mounts the World — are these prophecies real, or is it dangerous to believe in any such cryptic concepts, real though they might actually turn out to be?

Melisandre attributed Beric Dondarrion’s many resurrections to the Lord of Light, who she said kept the man alive for a purpose: to save Arya at a crucial moment, so she could then defeat the Night King. Well, if that’s true, why did the Lord of Light bring dead Jon Snow back to life? Does the Lord of Light even exist? Or have the priests and priestesses of the Red Temple mistakenly attributed their own magic to a god? And let us not forget all the people worshiping the old gods, who turn out to be a psychic network that uses the weirwood trees to spy on everyone. Would this make Bran a god? Where is the line between magic and religion, and which is the most powerful?

Although faith never died out in this world, magic did — until the events of this story, which saw its resurgence. Why did magic return to the world when it did? And what will it take to restore balance in this world?