Little Printer returns as an open-source messaging device – The Verge 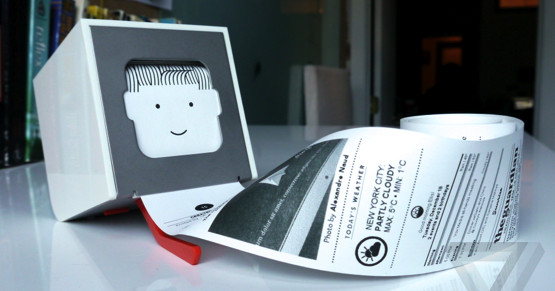 Berg’s Little Printer, an adorable internet-connected box that printed out tiny snippets of news, Instagram photos, and to-do lists, stopped working when the studio and its servers shut down in 2014. Now, design consultancy firm Nord Projects has brought it back to life with a brand-new app, and it added the ability to send messages between devices, as reported by Core77.

A group of Little Printer enthusiasts on GitHub collaborated to get the device back online through an open-source server called Sirius. Nord Projects then designed a Little Printers iOS app that re-created old favorite features like poster fonts and dithergrams, while adding a few more modern touches. The app lets you print photos and notes via the iOS Share sheet, and it has its own API so you can connect it to IFTTT services and have it print whatever is on your RSS feed.

Setting up messaging on the app is easy. You just create a username and device key, which is a unique URL that grants access for printers to message each other, like a phone number. You can make as many keys as you like and revoke access at any time if it finds its way to someone it wasn’t meant for. Device keys can be printed as QR codes so visitors can easily add your printer.

It’s like sending someone a physical text. (Yes, I realize this is basically a letter without the danger of the USPS losing your precious mail. Speaking as someone who is still unsure if some friends received their Christmas postcards, I don’t trust the system.) With this, you can send friends a comic, a tweet, or a nice message that won’t get buried underneath all your other notifications because it’s actually real!

All of this makes me want to find a used Little Printer, but unfortunately, nothing turned up when I tried searching for one on eBay. If you’ve held on to yours all this time, you can use this guide to get your printer on the new server to get it up and running again.