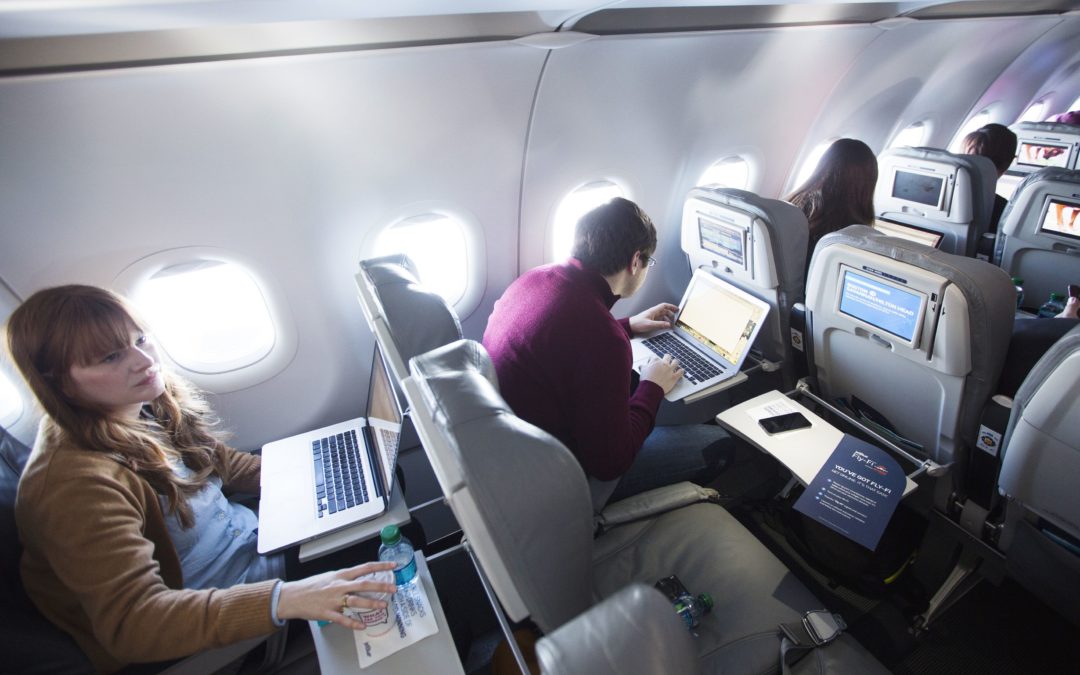 Journalists use their computers to test high speed inflight Internet service on a flight out of John F. Kennedy International Airport in New York.

It wasn’t all that long ago (2000 or 2006, depending how you measure) that being able to access the internet on an airplane was a pie-in-the-sky idea.

Once the technology became generally available and airlines began equipping planes with Wi-Fi service, passengers soon found they couldn’t bear to fly without it. Inmarsat’s latest Inflight Connectivity Survey found that more than half (55%) of all airline passengers considered inflight Wi-Fi to be a crucial amenity. And almost as many (53%) said they’d be willing to forgo an alcoholic drink, tea, coffee, and other in-flight amenities in exchange for Wi-Fi access.

As Delta Air Lines takes its first steps towards offering free Wi-Fi with a two-week pilot test that began May 13, the Atlanta-based carrier could ratchet up pressure for other airlines to make the service more widespread.

Staying connected in the sky

While free messaging is available on Alaska Airlines, Delta Air Lines and Southwest Airlines and on a variety of international airlines, most domestic airlines levy a charge for accessing the internet for email, streaming and other purposes. And the cost to access that Wi-Fi varies — sometimes widely.

Southwest Airlines charges $8 a day for its Wi-Fi service, which prohibits access to Netflix and other high-bandwidth applications. Gogo, which provides inflight Wi-Fi to airlines such as United, Delta, Alaska and Air Canada, sells a variety of buy-before-you-fly passes. Order ahead and you’ll pay $7 for one hour of Wi-Fi access on domestic flights and $19 for 24 hours of Wi-Fi access on domestic flights.

Wait until you’re in the air to buy Wi-Fi access, though, and on most airlines the cost will be much higher.

How much higher? “Prices will vary,” is all several airlines will tell you. It is rare, if ever, that purchasing an hour or a full day of Wi-Fi access is cheaper once you’re up in the air.

But the tide on paid inflight Wi-Fi may be turning.

In 2016, JetBlue became the first domestic airline to offer its Fly-Fi streaming-quality Wi-Fi service free on all its planes.

Delta’s test of free Wi-Fi  means the service is available on around 55 domestic short-, medium- and long-haul flight segments a day.

“Customers are accustomed to having access to free Wi-Fi during nearly every other aspect of their journey, and Delta believes it should be free when flying, too,” said Ekrem Dimbiloglu, Delta’s director of onboard product, in a statement.  “Testing will be key to getting this highly complex program right — this takes a lot more creativity, investment and planning to bring to life than a simple flip of a switch.”

The test flight segments change daily; passengers learn if they’re on a free Wi-Fi flight from a pre-flight email or via a push notification from the Fly Delta app. Gate agents and flight attendants are also making announcements.

Only free “basic” Wi-Fi is offered as part of the test, so passengers who need a more robust service for streaming will have to purchase the paid service. Right now it costs $16 for a North America Wi-Fi day-pass on Delta, if purchased pre-flight.

“It’s nice to see an airline offering a desired amenity on a complimentary basis,” said travel industry analyst and Atmosphere Research Group founder Henry Harteveldt. “But I’m uncertain whether Delta will be able to increase its market share, customer preference or revenue premium enough to warrant offering the free Wi-Fi.”

Other industry experts expect Delta will continue down the full-time free Wi-Fi path, though, and that other airlines will have no choice but to follow.

“Delta tends to go first with these kinds of customer-friendly initiatives,” said Seth Kaplan, an aviation journalist and author of the book “Glory Lost and Found: How Delta Climbed from Despair to Dominance in the Post-9/11.” Kaplan said American Airlines and United Airlines sometimes match Delta rather than lose customers, even if they’re reluctant to do so. “But Delta’s move makes widespread free Wi-Fi much more likely than it seemed until recently,” said Kaplan.

“Millennials and younger generations expect free Wi-Fi access everywhere, especially when they are traveling,” said Kelly Soderlund, a travel trends expert with Hipmunk. “Much like hotels, which have been successful in leveraging consumer loyalty through free Wi-Fi, I would expect airlines to follow suit and meet that demand.”