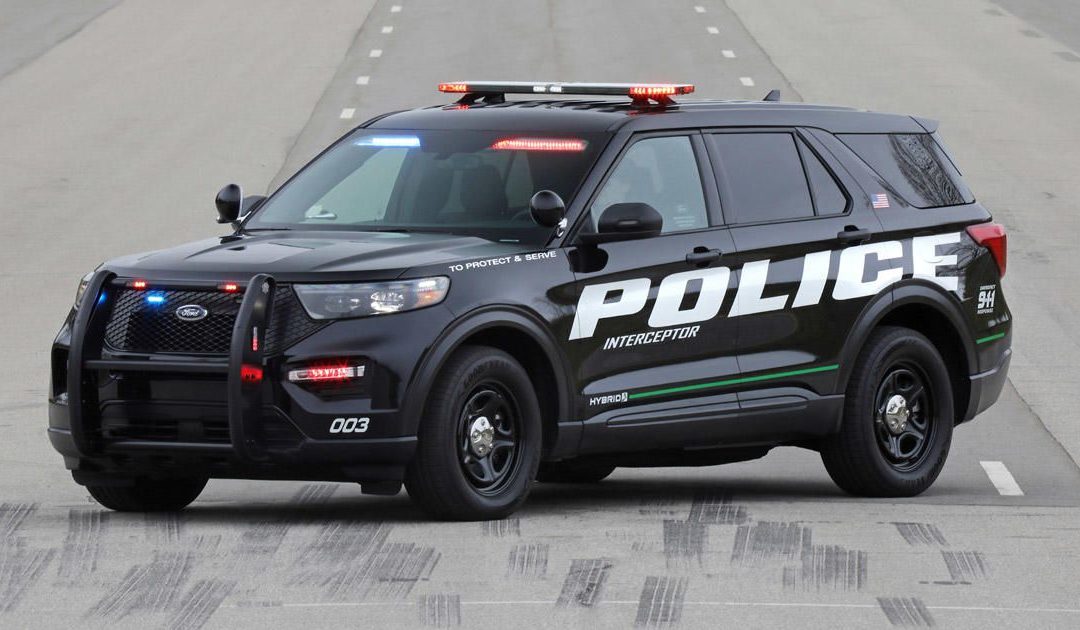 You can call the Ford Police Interceptor Utility big, you can call it homely, you can even call it late for dinner. But, whatever you do, don’t call it just another Explorer.

Yes, the 2020 Ford Explorer and the 2020 Ford Police Interceptor Utility were both unveiled at the same time. Yes, they look awfully similar, and yes, they were built on the same platform at the same Chicago facility. But that’s where the similarities end, as I found out after a couple of laps behind the wheel of Ford’s latest cop car.

Instead of plucking Explorers from the line to convert to police cars, the Ford Police Interceptor Utility is treated like a separate vehicle. PIUs receive a whole host of parts that never make it to the pedestrian Explorer. There’s a positively massive set of brakes behind custom steel wheels and beefy tires. The suspension tuning is different, the transmission calibration is different and the interior is a far cry from comfort-oriented. Hell, there’s even 160 extra pounds of metal in the back to withstand 75-mile-per-hour collisions.

Yet, there is one interesting bit that’s the same between both of these vehicles, and that’s the hybrid system. Sandwiched in Ford’s 10-speed automatic transmission is a 44-horsepower electric motor that combines with a 3.3-liter naturally aspirated V6 for a net 318 hp and 322 pound-feet of torque.

Ford calls this combination its Modular Hybrid Technology, and we’ll again see it in the F-150 hybrid, whenever that debuts. Unlike Ford’s other hybrid systems, like the one on the upcoming 2020 Ford Escape, the setup in the Explorer is all about making sure its electrified powertrain can still handle SUV-level rigors like a 5,000-pound towing capacity, off-road driving and sustained high-load use.

In addition to learning a little bit more about Ford’s upcoming hybrid tech (including the aforementioned Modular Hybrid Technology), the automaker this week offered me two quick laps behind the wheel of the new Police Interceptor Utility hybrid SUV. It was refreshing to be on the other side of that spotlight, for once. Not that I would be chasing perps or anything — it was just me, a short handling track and an instructor to make sure I kept it shiny side up.

The course consisted of a couple straights, a couple sharp turns and a longer left turn. I slid behind the wheel of the Police Interceptor Utility, and the first thing I noticed was the stripped-down interior. A column-mounted shifter makes room for a police-style center console with switches to control its dedicated police bits (lights, sirens, stuff of that ilk) with enough leftover space for a laptop or two. So, for those of you hoping to glean some insight about the 2020 Ford Explorer from this, you’re out of luck. It’s a totally different beast.

Despite its claim to being one of the quickest cop cars on the road, the Police Interceptor Utility didn’t exactly raise hairs on the back of my neck. The acceleration wasn’t particularly brutal or surprising, but given the extra additions to the PIU, it felt sprightly enough to give chase to sportier scofflaws. The braking, on the other hand, was phenomenal — the brakes were incredibly grabby and capable of bringing the SUV to a halt in surprisingly little time. The suspension was a little stiff, but it clearly favors capability in pursuit versus officer comfort.

Going green, but only if you want to

Police departments can opt to ditch the hybrid system, but I don’t know why they would. Sure, there’s a roughly $3,500 price difference by running the 3.3-liter V6 alone, but by Ford’s estimates, a department could make that money back in fuel savings in just a year, and the savings will continue to pile up after that. It also outperformed the competition in the Michigan State Police’s cop-car test, which involves acceleration and top speed runs, in addition to a timed run around a closed course.

The only vehicle faster in the MSP’s testing is another Police Interceptor Utility variant, wielding a 3.0-liter turbocharged V6. According to Motor Authority, of the 8,000 or so orders for the new PIU, only 1,000 are for hybrids, while the plurality of orders are for the non-hybrid 3.3-liter V6 setup. Hopefully, that will change. Not only is the new Police Interceptor Utility more efficient than it was before, it’ll perform better, and it will provide greater savings in the long term.

Editors’ note: Because Dearborn is 11 miles from my house, I provided my own transportation to and from Ford’s event, but the automaker did hook me up with lunch and some coffee.