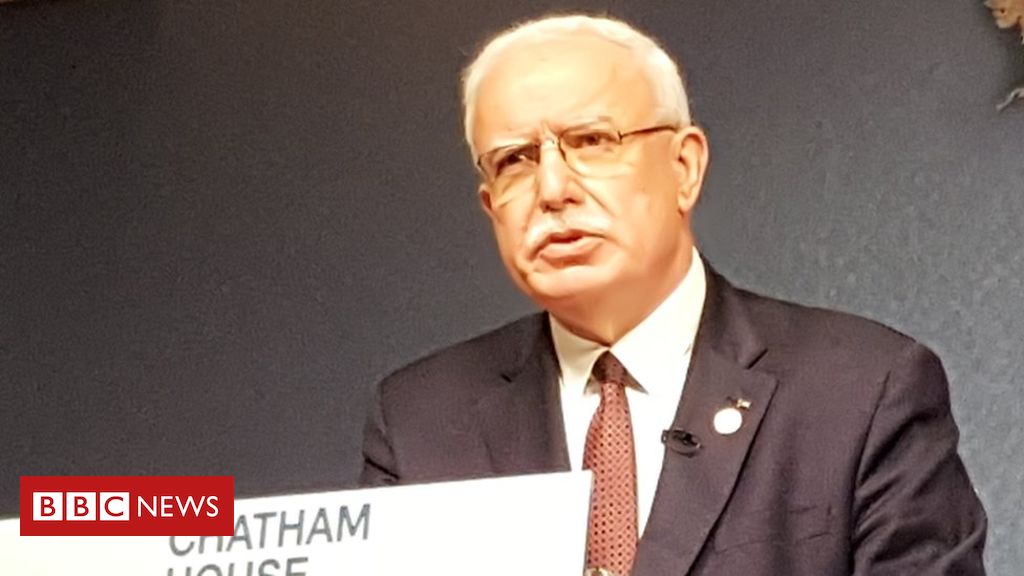 The Palestinian foreign minister has branded the anticipated US plan for ending the Israel-Palestinian conflict an unacceptable “surrender act”.

Riad Malki said the plan that Donald Trump calls the “deal of the century” was in fact “the consecration of [Palestinians’] century-old ordeal”.

No confirmed details have been revealed of the plan, which Washington says could be unveiled next month.

Israel has not officially taken a position towards the plan.

Earlier this month Mr Trump’s senior adviser Jared Kushner, who is an architect of the plan, said the proposals will be a “framework… [which] will lead to both sides being much better off”.

It is unclear whether the plan will be based on the so-called “two-state solution” – a long-standing formula for resolving the conflict by creating a Palestinian state alongside Israel, with Jerusalem a shared capital.

The Palestinians and most of the international community support this approach in principle, while the Israeli leadership is cooler towards it.

Speaking at Chatham House think tank in London, Mr Malki said all the indications were that “this [US] administration is preparing to give its stamp of approval to Israel’s colonial policies…

“When it comes to taking the lead on peace efforts, the world left the steering wheel in the hand of a reckless driver… with a view that we should wait till the reckless driver goes over a cliff or runs over the Palestinian people [before doing] something about it.”

The Palestinians often describe Israeli settlement and other activity in the occupied West Bank as a form of colonialism, a characterisation which Israel strongly rejects.

Israel has built about 140 settlements, home to more than 600,000 Jews, in the West Bank and East Jerusalem since it occupied them in the 1967 Middle East war.

Palestinians claim the territories for a future Palestinian state.

The settlements are considered illegal under international law, though Israel disputes this.

Mr Malki said the Trump administration’s plan offered “no independence, no sovereignty, no freedom and no justice – and if [the US] do not think that this situation will have an impact on the future of Israel and the region one way or another, they are the ones that are delusional and not us”.

Inferring that acceptance of the Trump plan would be “capitulation”, the foreign minister said the Palestinians would “never be ready to sign a surrender act”.

“This is a defining moment,” he said. “If you think action [to resist the plan] is too costly, just think of the alternative and of the path it would set us on for decades to come.

“Our people have not suffered so long or endured so much to simply change the size of their chains.”