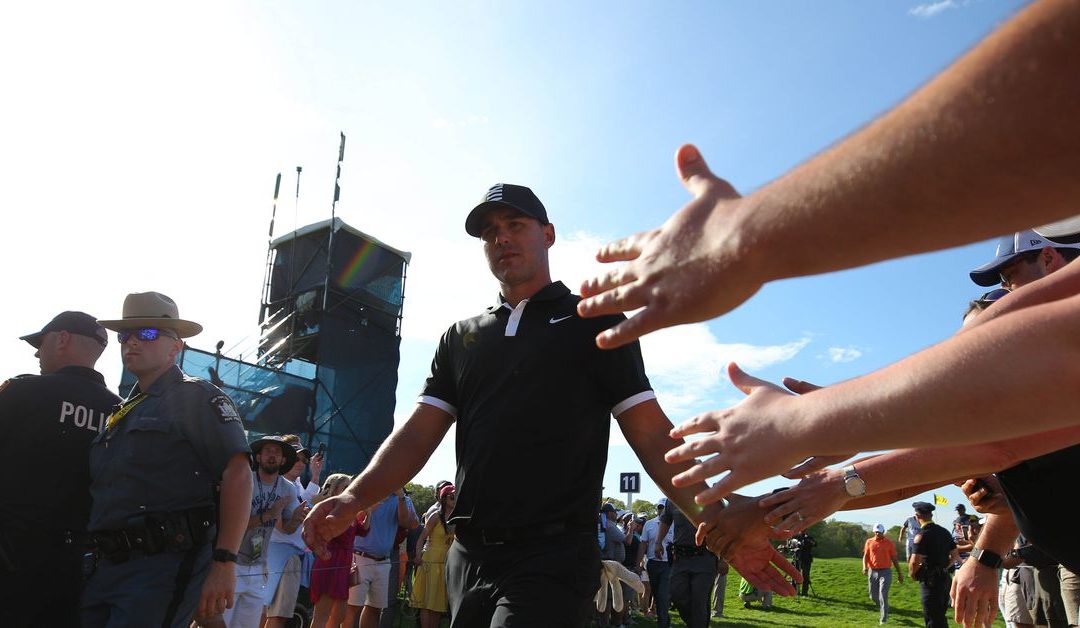 Brooks Koepka is going to win the 101st PGA Championship. This is not meant to be some proclamation for dramatic effect and it is definitely not some bold take. It’s just what is going to happen. These are the simple facts on the ground at Bethpage Black, and even the other players are acknowledging it publicly.

“We’re all pretty much playing for second and it seems like that hasn’t been said since Tiger back in his heyday,” was the line Luke List, who is currently tied for second, dropped on CBS during a post-round interview. It won’t make for an especially competitive final round and a CBS producer may have frantically tried to pull List’s mic as he gave their Sunday broadcast a limp sell, but that doesn’t mean Koepka is not worth watching on his own.

There have been a handful of major championship blowouts since Tiger’s infamous runaway at the 2000 U.S. Open, which is hailed as the greatest golf ever played. Jamie Kennedy put together a solid list of recent blowouts that included Jordan Spieth’s 2015 Masters, Martin Kaymer’s dominance at the Pinehurst U.S. Open, and Rory McIlroy’s 2011 easy walk at Congressional. We’re always prisoners of the current moment but I can’t recall Tiger’s 2000 win being invoked as often as this week. The context of this blowout pushing Brooks to a fourth win in the last nine majors and becoming the first player in the history of golf to hold back-to-back U.S. Opens and PGA Championships may add to the ease of throwing out the Tiger 2000 mentions. McIlroy and Spieth and Kaymer didn’t have that as the capstone during their blowout wins.

There will never be another Tiger Woods so it’s stupid to try and say Brooks is on his way to those heights. Some of those aforementioned names like McIlroy and Spieth were touted as the “next” post Tiger superstar during their hot streaks at the majors. No one will approach Tiger’s dominance at the majors and year-round on the PGA Tour. The names will continue to ebb and flow from a committee of stars, which, miraculously, now includes Tiger again. Koepka winning the PGA and holding four trophies at the same time, however, would probably be the most impressive post-Tiger stretch, the thing that comes closest to approximating peak Tiger. He’s still not the next Tiger.

He’s also not the next Greg Norman. We saw that last year when he choked out Tiger’s attempt at winning the PGA as the crowds lost their damn minds up ahead of him. Norman and lesser stars would have been shook but Koepka always says he’s unbothered by everything happening around him and he looks it too. He did not have his absolute best stuff on Saturday in tougher conditions at Bethpage, but he still posted a 70 and is seven shots ahead. It was the first time he didn’t break par in his last 11 major rounds but it changed absolutely nothing about the dynamic of this championship.

That 7-shot margin may shrink but the lead is not going anywhere. The historical data suggests it and so does Koepka’s play. There is the intangible “stuff” of looking totally unbothered, and then there’s the ability. When he gets himself in trouble, his strength gets him out of it. We saw that at the 15th on Saturday afternoon, just moments after CBS’ Peter Kostis wondered how he’d get the ball anywhere close to the green from an awful lie in Bethpage’s gnarly rough.

That strength and talent also allows him to play a different game than so many of his competitors, like he did at the 5th. There he cut the corner with a 331-yard drive and stuffed a wedge to inside three feet. A tap-in birdie on what has been one of Bethpage’s hardest holes this week, his second birdie in his first five holes, had any desperate moving day hope of his coming back to the field extinguished.

Brooks’ strength also allows him to miss smarter and better when he might not be perfect. He may be typecast as this big meathead, but he’s been brilliant about strategizing his way around both this course and places like Shinnecock Hills. It was the first thing Tiger praised on Friday night shortly after Koepka beat him by 17 shots over 36 holes. Koepka is missing on the right side of the hole with better angles and his strength puts him far enough down the hole to mitigate the trouble.

“He misses on the correct sides, and he’s far enough down there to where he was able to get the ball on the green and he did all the little things right,” Woods said. “He had the good angles. He missed the ball in the correct spots, and it adds up to a big lead and as I said, there’s no reason why he can’t increase this lead.”

That’s maybe the best golf mind ever praising Koepka’s approach. So we have a machine that does not seem to notice he’s playing in a major championship with a mind that seems perfectly tailored for acing those major tests and the ability that maybe no one in the game can match right now. It all adds up to another Sunday stroll to a major championship trophy. There will be beauty in watching just that, even if there will be no real drama about the outcome, aside from whether or not he can push it to a Tiger-like double-digit margin.